« Older: 2nd Murder in San Pedro in one week
Newer: » One arrested for Wings robbery 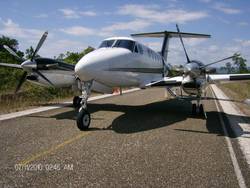 On Saturday 13th of November 2010 about 2:00am, Independence Police (ISF) received information of an aircraft suspected to have landed somewhere in Bladden Village. As a result ISF police proceeded to the area where a white van was seen coming through the area , where with the assistance of Belize Special Assignment Group (B-SAG)the van was intercepted at the San Juan Bus Stop.

On board the van were the following persons.(1) Driver was Renel Grant 33yrs, Corporal of Police attached to Traffic Branch in Belize City;(2) Nelson Middleton 39yrs, Corporal of Police and Driver assigned to the Govenor General and resident of Camalote Village;(3) Lawrence Humes 38yrs, Sergeant of Police presently attach to Belmopan Police Station of #2 Grapefruit Street in Belmopan;(4) Jacinto Roches 42yrs Sergeant of Police attached to the Internal Affairs Desk Belmopan and a resident of #22 Tangerine Street Belmopan and(5) Harold Usher 36yrs Boatman at Customs Department of a Finca Solana address in Corozal Town.

All of the above persons were detained and escorted to the Independence Police Station along with the van. At the station a thorough search was conducted on the van resulting in the discovery of the following items: Several BDU’s with ADU markings, several wet clothing, 2 car size batteries Atlas brand , muddy jungle boots and tennis, can food , empty sausage cans, a licensed 9mm for Harold Usher.

The said van has been processed by Scenes of Crimes and Forensic, and items found have been labeled as exhibit. ASP Alton Alvarez, Officer-in-charge for Independence Police along with other police officers left en route to Bladden Village where between miles 56 and 57 they met BDF/B-SAG personnel. At the scene, they secured a white twin engine Beechcraft aircraft 300-FA 137 with Black, Red and White in color with number N786B Super King Air 200. The aircraft was processed for finger prints.

Also found at the scene was:
(1) Atlas brand car battery with 2 pieces of board which had(3) lights attached on both sides. Further checks between miles 59 and 60 led to a small white container truck with VIN# JDAMEO8J2RGF75162 that contained (23) 17-gallons plastic containers(3) tank with about 500 gallons of aviation fuel and 3 fuel pumps. Also found were a total of 12 pine logs.
Searches by the police in the Hicatee Area about 5-10 yards inside some bushes led to the discovery of
(1) GPS Garmin brand(
1) Iridium Satellite phone
(4) Hand Held radios
(2) RAYOVAC Flashlights
(1) Colt .223 semi-automatic rifle with Sr. No. 007865 with a magazine containing 5.56 rounds and 2 pairs of camouflage jackets.

At around 5:00pm as a result of further searches in the area conducted by Police on a road at mile 65 near the Genus Saw Mill, about ¼ mile in, led to the discovery of 80 bales of suspected COCAINE and 17 loose packs of suspected Cocaine. The drugs have since been secured by police and is being processed by Forensic personnel.