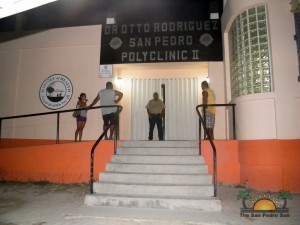 San Pedro police are investigating a shooting incident. Sometime around 3am today, May 12th, police responded to a call that shots had been heard in the Escalante area south of San Pedro Town. When police arrived to the area they found a man with what appeared to be gunshot wounds to his face and bleeding profusely. The man was identified as Barrington Usher of the Escalante area. Usher was rushed to the Otto Rodriguez Poly Clinc II for medical attention. According to police, Usher explained that around 3am he was awakened by a knock at his door. When he checked through his window he noticed someone familiar to him from the same area. An argument began between the two men which lead to the person pulling out a gun and shooting Usher through the window. Usher sustained one gunshot wound to the left cheek area of his face. At the clinic he was stabilized but then fell unconscious while receiving treatment. Usher was transported to The Karl Heusner Memorial Hospital (KHMH) where he is listed in critical but stable condition. Police are looking for one person as their investigation continues. The San Pedro Sun will post more information as it becomes available.

Christian Espat, Nigel Williams and a minor arrested and charged in shooting robbery of Cliff Kirk