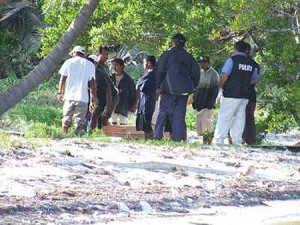 A jury of 12 handed down a not guilty verdict on the four men accused in the double murder of James Swan and Edwardo Gutierrez. As we reported in the Thursday May 25th, 2012 publication of The San Pedro Sun, the case began on May 16th in the 2012 setting of the Supreme Court in Belize City. On Wednesday May 30th, the jury took five hours to deliberate and pass down a not guilty verdict for murder and manslaughter against Brionne Swift, Victor Garnett, Frank Edwards Jr and Gabriel Salazar.

During the trial, the prosecutor called in their main witness Eric Swan, the brother of deceased James, but the jury was not convinced by his story. In his account, Eric told the court that he never saw the actual murder but heard shots while being held hostage in a boat.

On January 29th, 2009 James Swan Jr and Edwardo Gutierrez were killed and buried in a shallow grave in the Rocky Point Area some 16 miles north on Ambergris Caye. Police believe that the double killing was a result of a series of events allegedly motivated over a cocaine wet drop. Two of the four accused gave sworn testimonies while the other two gave statements from the dock. They all claimed that Eric fabricated the story. Two of the men, Garnett and Swift who spoke from the dock, told the court that they were not at the crime scene. Garnett told the court that he was in Belize City while Swift said he was on the island but at home at the time of the incident. Salazar and Edwards, Eric’s cousins, also claimed they were not a part of the murder.

After passing a not guilty verdict trial Judge Herbert Lord dismissed the case allowing all four to walk free; however Salazar was not release because of pending matter before the court.