Police in San Pedro Town arrested and charged one person for a double stabbing that occurred on Thursday May 23rd. The victims are 25 year old Cozet Maximo originally of a Belize City address and 25 year old Kenneth Jones of a Boca del Rio area of San Pedro Town. The two were stabbed shortly around 2:30AM while walking in the down town area on Barrier Reef Drive. As a result of the stabbing, police arrested and charged one Bridgett Guzman, also known as “Busy Bee.”

“I was walking on my way home and two girls just attacked me and stabbed me with an ice-pick about ten times. I was stabbed coming out of an alley on front street [Barrier Reef Drive],” explained Maximo. She also said that she also positively recognized her attacker. As a result of the incident, Maximo received stab wounds to her right and left arm, on her back and on her right breast. 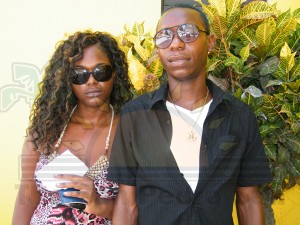 But Maximo was not the only one hurt in the stabbing. Her friend, Kenneth Jones who was with her, was also stabbed as he assisted Maximo. Jones was stabbed once to the left hip but in the heat of the incident, he did not realized that he was stabbed and it was not until a few minutes later that he realized he was injured. “I felt a burning sensation and felt my clothes wet. When I lift up my shirt I notice I was covered in blood and realized that I was stabbed,” commented Jones to The San Pedro Sun.

Both Maximo and Jones were taken to a private medical facility on the island and later in the day were taken for further treatment to the Dr. Otto Rodriguez San Pedro PolyClinic II. Accordingly, Maximo and Jones’ injuries were classified as “wounding.”

Maximo reported to police that “Busy Bee” stabbed her claiming that she was “taking over her turf”. According to police, a few hours prior to the stabbing, Maximo and Busy Bee were involved in an altercation while socializing at an establishment. According to the police, Busy Bee visited the Police Station and made a formal police report in regards to the incident and requested court action. Because of the chain of incidents, two police counter charges were ordered against Maximo and Guzman.

Police formally arrested and charged Guzman for two counts of wounding. Maximo was also charged but for common assault. When they were escorted to court on Friday May 24th before Magistrate Sherigne Rodriguez, Maximo and Jones withdrew charges on the condition that Guzman does likewise. Both parties agreed to drop the charges and the matter was deemed as settled.