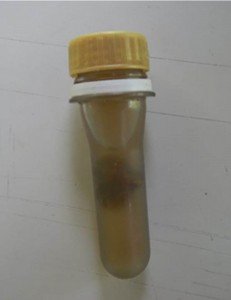 On the evening of Friday, 31st May 2019, Conservation Rangers and Special Constables operating in the Ceibo Chico area of the Chiquibul National Park, 7.5 kilometers inside Belize, intercepted three Guatemalan gold panners two of whom escaped into the jungle. The third was caught in time but a struggle ensued between him and a Special Constable where he had to be subdued by hand before being arrested for illegal entry into the Chiquibul National Park.
The detainee, 22-year-old Guatemalan national Salomon Martinez Pascual, is a repeat offender. He was found with 5 grams of what appeared to be gold contained in a small vial. Pascual was promptly handed over to the San Ignacio Police after being fed and escorted from the Chiquibul.
On Monday, 3rd June 2019, Pascual was charged with illegal entry into a National Park and with immigration offences. He pled guilty in front of the Magistrate where he was fined $3,000 or 12 months imprisonment for illegal entry into the National Park, and $1,000 or 6 months imprisonment for immigration offences. The vial with gold will be handed over to the Mining Unit for any further charges to be laid.
In future patrols, ranger teams will wear a chest-mounted camera to record footage of incidents to aid in prosecution.