The San Pedro Town Library hosted its annual two weeks’ children’s summer camp at the library. The camp was held between the hours of 9am and 12pm, through the weeks July 16th – 20th and July 30th through August 3rd. The theme for this year’s summer camp was “Belizean Folklore Characters” and highlighted popular Belizean folklore characters such as the Tata Duende, Anansi, X’tabai and La Llorona.

The first week of the camp was focused on reading, drawing, arts and crafts, and story telling based on the abovementioned characters. During the second week of the summer camp, the children were given the opportunity to showcase their talents in acting and drama. Throughout the second week, the children were taught how to produce a play, from the production phase to the actual debut. The enthusiastic students learned how to make props and create their costumes, plus makeup training with facial expressions, body language and stage positions. These tips certainly came in handy while presenting the play.

The camp came to an end on Friday August 3rd when the kids awed their parents and guardians with an adorable play showcasing the various legends; the funniest and crowd favorite being that of the Anansi. The play, written by Cindy Fuentes took on life as Sharon Hazel worked along with the children, mentoring them in the art of dramatizing. The play told the story of a disbelieving Anansi – not believing in the Xtabai, Llorona or Duende. One fateful day as he hits the fields searching for food for his family, his unbelieving eyes come upon each of the three legends, leading to a rather huge scare. 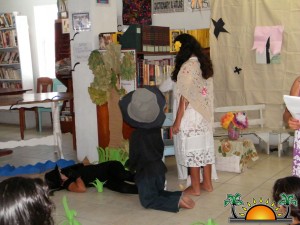 Faking his fainting – Anansi falls to the ground, while each legend reminisced on how close they came to being destroyed by Anansi – in effect spilling their own weaknesses. Anansi, lying on the presumed unconscious – Anansi listens and plans his revenge.

The story goes on to show how Anansi plotted and plotted and eventually outsmarted all three legends and scared them so he never had to hear from them again.

Volunteers Lisa Castillo and Hermela Rodriguez assisted the kids in the making of their props and costumes. Following the play, senior Library Assistant Iracela Acosta, awarded the participants with gifts and certificates.
Organizers of the camp take this opportunity to thank the children for attending camp, as well as their parents for allowing their children to take part. Volunteers Lisa, Hermela, Cindy and Sharon are much appreciated for their support and help in organizing and teaching the children the various skills that led to a fantastic play. The San Pedro Town Library would also like to thank the following businesses and private individuals for their contributions of snacks and drinks provided for the children during the two weeks of the camp: Ariani Gongora, Annie’s Pastries, Bananas Resort, Irenie Worthington, Ms. Leni Alamilla, Celi’s Deli, Josey Dawson, Castillo’s Hardware and Mrs. Colon. A heartfelt thanks is in order with the hope that your support and patronage continues in the future.