Recently, director Ben Popik sat down with The San Pedro Sun to talk about his new film “The Exquisite Corpse Project“; a Comedy/Documentary that portrays a group of guys who work together to write a screenplay for a film, but with one major twist… each person only gets to read the last five pages of the previous section the other person wrote. Ben brings together five comedians, and surprises them with a challenge: to each write fifteen pages of a movie, having read only the previous five pages of the script. They agree with one stipulation: if they write the movie, he has to make it. It sounds like a really weird concept and you’d think… “no way in hell would that work”. Well you know what, it does, and it turns out to be one kick-ass feel-good fun movie about nothing and everything. It’s a comedy, a love story, a psycho-sexual thriller, and a supernatural adventure all in one! One Movie… Five Writers… a thousand different twists and turns! 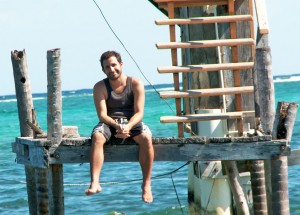 Ben is a New York native who’s now living and working in San Pedro where he and his wife Joanna own “Island Films” a full-service, HD video-production firm. In his own words, he is here because “it’s so beautiful…I love this country, this country’s amazing!” He’s no stranger to working both on and off the camera, having worked on tons of productions with companies such as Discovery Channel and his own production company Olde English Comedy, producing/writing/editing comedies and films for television for over eight years. This however is his first feature length film and judging by the reaction of critics who’ve seen it so far, it’s a really good one.

The movie is a film about making a film. A documentary that takes you through the process of writing a feature length picture, when all you have to work on is the last five pages of what somebody else wrote. Ben feels that this is a fresh and fun concept that allows the viewers to get a glimpse of all the drama and madness that goes on behind the scenes and then gives them the finished product in all its beautiful madness. Not only do you get to see what they made… but you get to see them making it, and all the bumps and hurdles in between.

When asked why he choose to do the film in this way he said that “it’s a film about what it’s like to work with your friends, and how fun that can be and how excruciating that can be because the creative process is full of disagreements, and fights and then when you bring that into the friend space it’s sort of another level of complicated. Because when you’re close to somebody you feel like you have a certain freedom to be brutal in a way where people who don’t know each other well would make an effort to be polite and tactful and there’s no reason for me to be mean to them. I can make a point without doing that, but when you’re close to somebody it’s a little bit easier to be like… ‘Well that idea sucks… and you should feel bad… and this is why your girlfriend fights with you all the time [chuckles]’. And so a lot of that makes it into the documentary and you can see how it affects people working together. Sometimes people try to trick each other, sometimes one guy thinks the guy before him sucks as a writer, and he builds that in a little bit with, you know, some attacks and jokes and stuff so it’s really interesting to see how all that comes out and… it works“.

Ben and his pals have played with the concept before in some of the comedic work they’ve performed in the past, but now they’ve taken a huge step forward and brought it to the big screen where it keeps you laughing and guessing and eager for more at the end.

The film will be premiering on June 2nd at the ‘Dances With Films‘ film festival on Sunset Boulevard in West Hollywood, California, USA. A few of our local San Pedro faces have even made it into the film with small cameos here and there as Ben takes everyone through the creative process and presents the entire production both on and off the set.

This is definitely a movie to look out for and we wish Ben and his buds all the success they deserve.

You can catch the trailer for ‘The Exquisite Corpse Project’ here below:

For more information and to find out about upcoming screenings, visit:
http://theexquisitecorpseproject.com

Music: “What Do You Want?” by The Easy Tease