A group of four actors, called Palindomos Teatro Independiente from San Jose Costa Rica, were on Ambergris Caye presenting a play entitled “La Celda Compartida,” translated as “the shared cell.” Palindomos’ stop to the island on Saturday July 21st is part of a tour through Central America and Mexico. While in Belize Palindomos took their play to three municipalities. 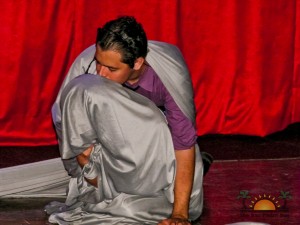 La Celda Compartida, directed by Dr. Diego Salgado, was presented at the Paradise Theater to about 100 people. The play is based on four people from different walks of life that end up sharing a cell. Confused as to how each individual arrived where they are, their frustration builds up as they try to figure amongst themselves how they ended up in the enclosed cell. Their frustrations eventually lead them to believe that they are inside a prison cell surrounded by glass walls. All four eventually begin to reminisce on a crime that may have landed them in the prison. Pretty soon the group realizes that the one element they have common is that they all have some connection with the father of one of the girls in the cell who is in the illicit business of drug trafficking to North America, using ‘drug mules’. Each in the cell was affected by this person’s operations either directly or indirectly. With no help from outside the closed room, the group eventually begins putting the pieces of the puzzle together just to realize that they were not even in a cell, but rather trapped into the reality of “Death”. The decisions in their lives had lead them to their faith and inevitable death 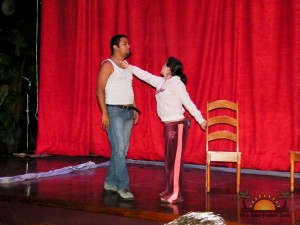 The play brings across strong street language and the use of terms associated with the reality involved in the drugs trafficking business. Speaking to The San Pedro Sun, Salgado explained that the play is based on real life situations in the region. “Even though it brings across a strong message, it should be able to help us to make better decision in life,” said Salgado.

The play premiered on March 27th in San Jose City on International Theatre Day and by the end of the tour Palindomos is expected to perform at some 100 functions.  The group is on tour through local support from the various municipalities that they visit along with a Costa Rican organization called “Fondo de Cultura Sies Palabras.”

Palindomos officially started in July 2005 and since then, they have travelled all over Mexico, Central and South America presenting various plays. While in Belize Palindomos presented their play in San Pedro Town, Orange Walk Town and Benque Viejo del Carmen. Palindromos, consisting of Director Diego Salgado, Mariel Chinchilla, Maria Laura Alvarado and Pablo Almengur, expects to be back in Belize next year with a new play. 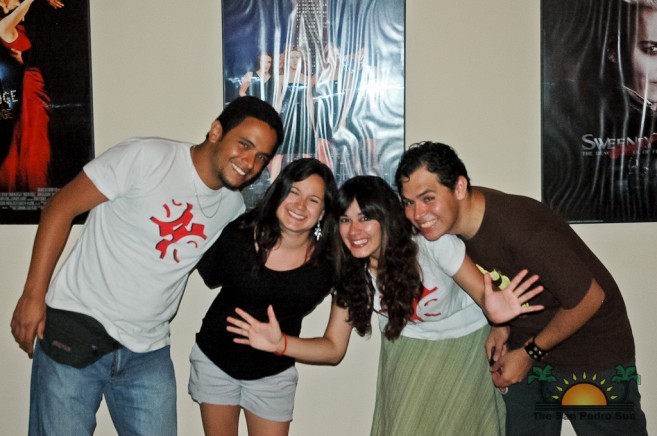 The San Pedro House of Culture takes the opportunity to thank everyone who was involved in making Palindomos’ visit to San Pedro possible. Special thanks to Amigo’s del Mar, Caye Caulker Water Taxi, Pamela Zetina, San Pedro Town Council and the Paradise Theater and all the members of the committee.