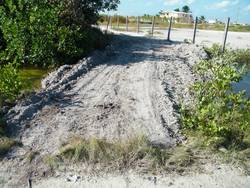 Last week The San Pedro Sun was informed of a new pathway that was created directly south of the airstrip’s fence. Upon investigating the area we found what appears to be a new roadway connecting Hope Street and the street directly in front of the property owned by Island Construction. The roadway measures about 10 ft wide and approximately 200 feet long and passes over two drainage canals that run parallel to southern end of the airstrip. Providing drainage under the filled in crossing for the eastern canal are four 8″ PVC pipes intended to allow the flow of water from one side to the other. The western canal was filled with dirt about six to twelve inches in depth.

Residents of the surrounding area grew concerned that the chances of major flooding could occur at the southern end of the airstrip, as the culverts, in some resident’s opinions, do not seem to be able to provide adequate drainage in the event of a major thunderstorm, and hence would cause quick flooding of the airstrip.

The San Pedro Sun met with Mr. Jim Zykan (Manager) and Mr. Craig Pruitt (Owner) of Island Construction respectively as part of our investigation. Island Construction accepted responsibility for the “re-creation” of the roadway to gain access to town, as there was a pre-existing street several years ago and offered an explanation for their actions.

Island Construction and the some seven families that presently reside in the area south west of the San Pedro Airstrip are currently using an access road that goes through San Pedrito and runs parallel to the airstrip’s fence, southbound. As of three month’s ago, to the knowledge of Mr. Zykan, Minister Heredia issued lots in the area where the present access route is located, which had been subdivided and owners recently commenced the reclamation phase of their various properties.

A total of approximately 49 lots were subdivided, many of which combine to take up a very large portion of the existing access route. There is an area allotted for a street, however, this area presently exists as a canal. There is presently no visibly sign of that route become a reality as a physical road. With this in mind, and the fact that owners at any time have the right to build fences that would create permanent blockage of access route, owners of Island Construction, as well as residents were in need of an alternate access route. This led to the re-opening of an access route, which use had been discontinued in the past.

The question of a permit came to mind. In an interview with Counselor Nano Guerrero, there was no permit issued for the re-opening. However, he did agree that there was an access route that pre-exited the current one in the very same area. He further stated that the construction was brought to his attention and that he did in-fact have a conversation with the responsible party, in which they came to an agreement that any issues arising from the pathway construction would be the direct responsibility of Island Construction.

Mr. Guerrero further stated that in his opinion, the passage way would be a necessity, as with the issuance of the new subdivision, residents of the area south west of the airstrip would have no other alternate route to access the town. However, he did advise that the pipes being used presently need to be replaced with bigger pipes. Furthermore, Island Construction is a Barge company, and need to be able to get their goods out to the town on a daily basis; hence he could see where the need arose. Mr. Guerrero mentioned that this is just a temporary fix, until the Town Council could find an alternate route that would be acceptable to all parties.

In an interview with Mr. Heredia, Minister of Tourism, Civil Aviation and Culture, he stated that his ministry had not given any authorization for the construction of the roadway. He mentioned that his office had looked at that area south of the airstrip as a possible access route, however, nothing was finalized. Should that happen, he insist that the roadway would need to have adequate drainage and be constructed with culverts to standards certified by engineers and would take into consideration the flow of water. Mr. Heredia affirmed that he plans on visiting the site on Saturday to look at the structure and whether it will be allowed to remain, or whether he will order that it be removed.