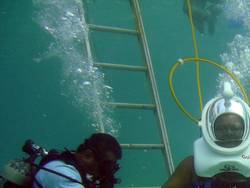 An Environmental Compliance Plan (ECP) was signed by Mr. Martin Alegria of the Department of Environment (DOE) and Mr. David Gegg of Discovery Expeditions on April 19th 2010, which gave clearance for an “underwater walking helmeted dive activity on a defined path, with a rope rail” and “operation of a floating barge with dimensions 42ft x 16.5ft housing the underwater helmeted equipment, air compressor and restroom facilities, to be located within the above specified project area.” Located in the Mexico Rocks Area of Ambergris Caye, near the Belize Barrier Reef, this Sea Trek location continues to raise questions, which The San Pedro Sun has tried to gain answers to.

The abovementioned was in fact the second signed ECP for the proposed project. In 2007, the first signed ECP was obtained, upon which over $750,000 was invested for a thorough survey and research of the area known as Tuffy. Based on observations at Tuffy, it was deemed necessary to create contained walkways that would prevent human interference or damage to the young coral that was observed thriving in the area. There were further concerns, and that area was dismissed for the project.

Maintaining the same plan as before, an underwater walk way with rails, a second ECP was conducted. This was due to the fact that the new plan also included the underwater walkway and rail, which according to Mr. Gegg, “We thought was the more responsible and environmentally friendly thing to do.” On Wednesday, June 16, 2010 at 7:00pm, a public consultation was held at the Lion’s Den where the idea was presented to the general public. Tempers flared and voices were raised as residents and interested parties were of the common belief that it would be detrimental to the fragile marine eco-system of the island. With images of concrete walkways and a floating barge containing a portable toilet in an area where most people enjoy snorkeling and sightseeing, the concern from residents and environmental advocates on the island was understandable. 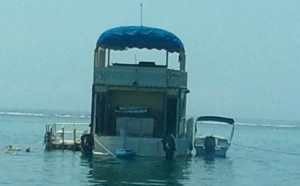 Shortly after the consultation, Sea Trek was in full swing. Our recent investigations led to some questions which we were able to have answered. When alerted to the continuous and at times extended overnight presence of the Sea Symphony, the vessel used to house the compressor, sea trek and snuba equipment, bathroom and so forth at the site, The San Pedro Sun did some investigating.

Mr. Gegg was once again very cordial and polite in inviting us over to experience the new and improved experience. The boat docked at the location and being supported by four buoys provided much needed shade as well as seems to be quickly becoming a haven for many marine life as the fishes congregate immediately beneath. In a very casual conversation he explained the improvements, the redundancy in all the efforts made to assure complete safety as well as the many other features that the Sea Symphony provides, not only for their guests but for guests from the resorts as well who have made it a habit to simply kayak to the boat, snorkel, grab a cold drink and so forth.

A truly interesting under water experience that brings the underwater world to just about anyone, Sea Trek is easy, safe and just about anyone can do it. Now with that said, we were off to do some further investigation as the original concerns remained.

Our investigations led us to a conversation with Mr. Martin Alegria of the DOE to gain some clarification. To our surprise, as well as his, he was unaware that the project was going on. Accordingly he stated,

“With the strong opposition of the public as well as the local government, the project should have been scrapped. They couldn’t finish the environmental cleaning or clearance process because they didn’t comply with all the conditions. It was my understanding that that was a project that would not have proceeded.”

Mr. Alegria further stated that it would have been under the condition that the project was granted permission from the San Pedro Town Council then the environmental issues would have kicked in. However, no such letter was received from the Council. “After local government issued the go ahead for the project, the DOE needed to have been informed, however that never happened,” stated Mr. Alegria.

As no other individual in the Town Council is allowed to speak on behalf of these issues, except for the Mayor, The San Pedro Sun made countless attempts to contact her, without success.

To further our investigation, we contacted Mr. Gegg, who once again spoke very freely and willingly to us. He first affirmed that yes, Sea Trek is an activity which is being offered and clarified that the way in which it is being done does not need environmental clearance. The need for the ECP was due to the proposed walk way and rails which were to be placed on the sea bed. However, as that idea was scrapped out, it simply became another dive activity which is offered. Mr. Gegg stated, “I am operating a boat, conducting a dive operation which was licensed by the San Pedro Town Council.” As a result of the new format in which the activity is being carried, the ECP was not necessary.

The San Pedro Sun will continue to follow this issue as it progresses – in particular, the concerns that the vessel remains parked overnight at the Mexico Rocks area. We were further informed by the director of the DOE that a thorough investigation of the Sea Trek project will be conducted within the next week and we will alert you as to their findings as they become available.