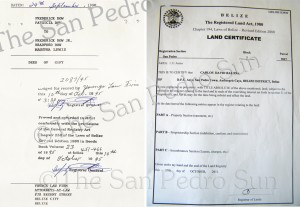 The real estate industry on Ambergris Caye has grown rapidly over the past few years and holding onto a piece of beachfront property is considered a piece of wealth by many. But like tourism, the real estate industry is moving so fast that keeping track of ownership of properties is taken for granted and to a larger extent, assumed to be in order. Combined with the loop holes within the Ministry of Natural Resources, and inadequate communication between related offices, the scenario is a perfect recipe for double-owned properties. One such case involves three US citizens who live in Los Osos, California USA who are claiming that they were scammed out of their property located in the Bella Vista area on Ambergris Caye.

In a letter sent to The Sun by Belizean real estate agent Lincoln Eiley, Eiley outlined that a prime beachfront property on northern Ambergris Caye, belonging to his clients, Martha Lewis, Brandford and Frederick Dow Jr., was illegally obtained and is being marketed by local realtors. The land in question is recorded as Deed of Gift 2087/95 at the Lands Department and located directly between Mitch Marques’ property and Azul Resort. The 1.3 acres plot of beachfront property belonged to Patricia and Fredrick Dow Sr. who purchased it from Apolonio Almilla on the 29th of August 1980. By a Deed of Gift, the couple passed on the property to their three children in September of 1995 and has remained in their names.

A spokesperson for the San Pedro Town Council explained that while they do not have record for that particular property, tax on Deed of Gift 2087/95 is current up to 2011. According to Eiley, he has exclusive listing for the property and is the only authorized person in Belize to market the property and so far, the property in question legally belongs to his clients. In his letter Eiley claims that “the property now seemly is vested under an “un-named” defendant while Milo Paz Jr., Mario Rodriguez, Pedro “Jimbo” Vasquez and Juan 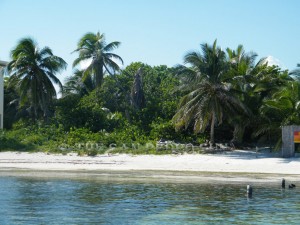 Alamilla seem to be the agents trying to sell or sold my clients land.”
While the Dows have held a Deed of Gift since 1995 tracing back to 1980, The San Pedro Sun has obtained documents verified by the Ministry of Natural Resources showing that one David Carlos Balona of a DFC Area address in San Pedro Town obtained Titled Absolute for the same parcel of land. The title, now registered at the Lands Department as Parcel 9627 was obtained on the 27th of October 2011 for which Balona paid and obtained a Government of Belize receipt in the amount of $13,000 for the 1.3 acre of beachfront property.

Investigation reveals that 20 days prior to obtaining Title Absolute, on the 7th of October, Balona received Lease Approval from the Lands Department. The entire process of obtaining the property was conducted in less than three months while permission to survey on the request of Balona was granted in late August and registered at the Mapping and Survey section of the Lands Department in September. By the 27th of October Balona had received Title for the land. In addition, receipts from the San Pedro Town Council also indicate that Balona had paid property tax on the said property and is current up to March of 2012.

For anyone who has been through the land acquisition process in Belize, this turn-around time may seem extraordinarily fast. Under normal circumstances this process by the Lands Department would take months and in some cases even years for someone to obtain a Lease Certificate. Nonetheless, Title was issued by the Lands Department to Balona for a property that a Deed of Gift has been issued to for close to two decades. The double ownership of the land is just another case showing a flaw within the Lands Department. It also shows a flaw in the property tax system at the San Pedro Town Council who is collecting tax from the two parties for the same property.

In our investigation, The Sun discovered that Mitch Marques was approached to purchase the land. Marques confirmed to The Sun that “local realtors” had offered him the land but was not interested in purchasing it and he declined to comment further on the issue. Juan Alamilla denied involvement with the land in question while Mario Rodriguez would only say that we should address our question to the Lands Department and declined to be interviewed. In an interview with Vasquez, Vasquez categorically denied having any involvement with the application process and said that he was approached to sell the property by Balona as a realtor.

Milo Paz said that, “We have no control over the Lands Department. When someone comes to us and wants to sell a piece of property and shows us that the paperwork is in order and is verified with the Lands Department, then we will sell it for you. I cannot sell something that you do not own. The person who came to me wanting me to sell his property brought his paper to survey; the amount he paid for the property, statement from the Town Board and everything was in order.” Paz stated that he was only involved as a realtor to sell the property. As for the allegations made by Eiley, Paz said that he has obtained legal representation and is in the process of suing Eiley for defamation of character.

While Balona has Title to the land, the Dows, through the help of Eiley have recently applied for the land to be tendered as “first registration” at the Lands Department in the name of the rightful owner. However, if the Lands Department erroneously gave title to another person, Eiley says that, “we may have to defend the title in court to get it restored.” Eiley advises land owners to register their titles under the new system to protect themselves from the “big bad wolf that is out there.” In an interview with Eiley, Eiley claimed that Mario Rodriguez has now moved to clear his client’s property. When The Sun visited the property on Friday, November 25th it was noted that the land in question is indeed being cleared and thus confirmed that Rodriguez’s workmen were conducting the cleaning of the property.
The Sun tried multiple times to get comments from the Commissioner of Land Wilbert Vallejos but all attempts were futile.