On March 23, 2012, 17-year-old San Pedrano Eric Donis will take on the challenge of swimming from San Pedro, Ambergris Caye to Belize City, Belize in an attempt to raise awareness for the delicate nature of our Barrier Reef. His goal comes as part of the Healthy Reefs – Healthy People Initiative that is geared towards promoting and demonstrating to the world how important it is to have a balance between a healthy environment and a healthy people.

Young Eric, who has been swimming competitively since he was fifteen, dreams of one day representing Belize on the international stage at triathlon events around the globe. He first became interested in triathlons when he was fourteen and saw it on television. He decided to begin training when he heard of a competition in Thailand that he would like to take part in. He aspires to represent our country at events such as the Olympics, and hopefully, at the world famous Ironman World Championships in Hawaii, USA. Eric is already along the path to achieving his goal having taken part in three events already, and placing first in two of them, and taking third place in a team race in Belize City.

On the Healthy Reefs – Healthy People’s Community Facebook Page, it states;“Eric came up with an idea to swim from San Pedro, Ambergris Caye to Belize City in just 3 days. He said he wanted to do it to raise awareness of the delicate nature of our Barrier Reef at a time when there was much talk about the dangers of offshore drilling for oil.”  After speaking with Eric he told The San Pedro Sun that he wants to do this because he feels that there is a lot of tension and arguments going on surrounding the issue of Offshore Oil Drilling in Belize. According to Eric, everyone is fighting for or against the issue, and not really listening to each other. He believes that in doing this, he would be able to get people’s attention, much like a teacher slamming a book on the table to break up an argument among students. Erik believes that everyone is entitled to their opinion but as far as he is concerned “they say [Offshore Drilling] is safe but the reef is not worth taking the risk.”

Eric won’t be swimming alone however. His impressive goal has resonated with other athletes and swimmers and has inspired them to take the challenge along with him. At least ten other swimmers and athletes will join Eric in his cause, as they too, see this swim as “not just an opportunity to raise awareness of the delicate nature of our reef system, but also a chance to showcase their talent.” Most of the other swimmers will be joining Eric on the last leg of the journey from St. George’s Caye to Belize City.

Triathletes are some of the fittest and healthiest people on the planet and on March 23-25, some of Belize’s top triathletes will swim from San Pedro to Belize City to make people aware of how important it is to ensure the health of our Barrier Reef. 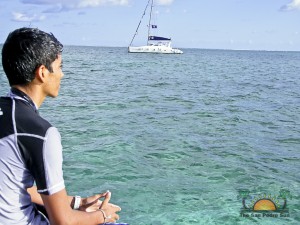 Eric Donis; ready to take on the challenge

Eric will be swimming some 35+ miles from the island to Belize City starting 5:00AM on March 23rd at the south end of Ambergris Caye.

The San Pedro Sun applauds Eric on this brave and inspirational goal. We wish Eric and all the other swimmers the best and will be showing full support for their cause when they take to the waters to help bring awareness for our delicate reef systems. The Healthy Reef, Healthy People Swim Challenge team invites anyone willing to support the initiative to be a part of it in any way they can; the members welcome any assistance from the country of Belize.

If you would like to offer some financial support in the form a donation or accommodations during his challenge or in any other way you can show your support by visiting the Healthy Reef, Healthy People Swim Challenge Facebook Community page to contact Eric and be sure to “Like” the page and share the cause.