« Older: Severely malnourished black jaguar to be rescued from Ballum Na Lodge
Newer: » SPTGA and CZMAI team up to promote Fly Fishing and Scuba Diving among youth of San Pedro

Oceana’s CEO meets with Belize’s Leader of the Opposition

Oceana’s Chief Executive Officer (CEO), Andy Sharpless was in Belize for a brief courtesy meeting to meet with key officials of the new government and members of the private sector community. Sharpless requested a meeting with the re-elected Prime Minister and also the newly installed Leader of the Opposition. The Office of the Prime Minister was unable to accommodate Mr. Sharpless’ meeting request. On his first official visit to Belize however, Oceana’s CEO had met with Prime Minister, Hon. Dean Barrow. He had never met Hon. Francis Fonseca, with whom he now had a brief and cordial courtesy visit. 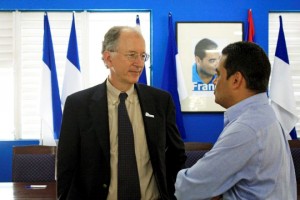 Mr. Sharpless provided Mr. Fonseca with an overview of Oceana’s purpose and work both internationally and in Belize and shared with Mr. Fonseca the importance for nations to adopt new marine resource management policies in order for each nation to continue harvesting the long term economic and food security benefits for its people and development. Mr. Sharpless took the opportunity to thank Belize, and all parties involved, for leading the world by becoming the first country, globally, to completely ban all forms of trawling; a fishing practice which indiscriminately destroys marine life and home. He explained how Belize is now being used as a model internationally and praised the Government for having taken such a bold move.

“It is always a pleasure to visit Belize and to meet with the political leaders and influencers of policy, to share our work with them and to hear their concerns and plans which affect Belize’s marine resources. The accessibility to the leadership across the board and their willingness to hear from civil society makes Belize special,” explained Sharpless who left the country today.