The Fisheries Department is working within the various marine reserves countrywide in conducting their bi-annual national conch survey. The survey, which should be completed next week, is conducted in compliance with Appendix Two of the Convention on International Trade in Endangered Species (CITES) and is intended to make stock assessment of the Queen Conch scientifically known as strombus gigas. The two marine reserves on Ambergris Caye, Hol Chan and Bacalar Chico have been working in various areas inside and outside of the reef to inventory all queen conchs regardless of their size. 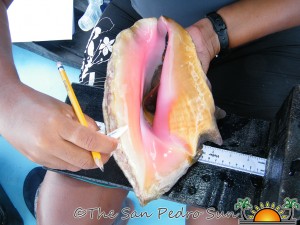 Hol Chan Marine Reserve Biologist Kirah Forman explained that because the flesh of the queen conch is one of the biggest fishery products exported from Belize, it is important for the country to provide critical information to CITES to show that the conch population is still sustainable. Because the queen conch is listed by CITES as endangered, Forman said that it is essential that Belize reports to CITES that Belize is monitoring the conch abundance and sustainability.

Forman explained that the methodology used to conduct the conch survey is similar to that used at Hol Chan Marine Reserve when doing their conch abundance survey before and after the official conch season in Belize each year. “We run transect lines inside and outside of the 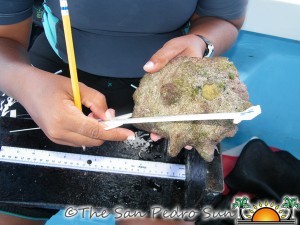 reef… inside the reef we run 200 meter transect lines and two meters wide on each side of the line in a grid pattern, we measure every single conch (queen conch) within the transect,” explained Forman. Two measurements are taken from the conch, the first measurement is the length of the conch from tip to base and the second is the thickest part of the flair lip of the conch. The survey off Ambergris Caye is held from the Belize/Mexico border where Bacalar Chico Marine Reserve starts and every two miles southward thereafter until they eventually pass the Hol Chan Marine Reserve. Forman said that they emphasize on holding a stock count in the fore reef (front part of the reef) is because, “Belize claims to have a deep stock of conch so we want to also be able to show that the deep stock is replenishing the back reef where most of the conch fishing is done.”

While Forman could not give preliminary findings so far on the national conch survey around Ambergris Caye, she said that around the Hol Chan Marine Reserve the population can be described as “stable.” The national conch survey is done every two years from the northern coastal tip of the country to the southern coastal end. Hol Chan conducts their own conch abundance survey inside and outside the protected areas at the beginning and the end of the conch season. The national survey off Ambergris Caye is conducted over a span of two weeks, just ahead of the opening of the official conch season which is scheduled to open on October 1st.