Belize City, 03 October 2014.
With the signing of three agreements and the announcement of a series of specific actions, this Friday took place the 8th Meeting of the Belize-Mexico Bi-National Commission. The Commission is the maximum forum of dialogue between both countries. Foreign Ministers Jose Antonio Meade and Wilfred Erlington led the meeting and announced the results after two days of work in Belize City. 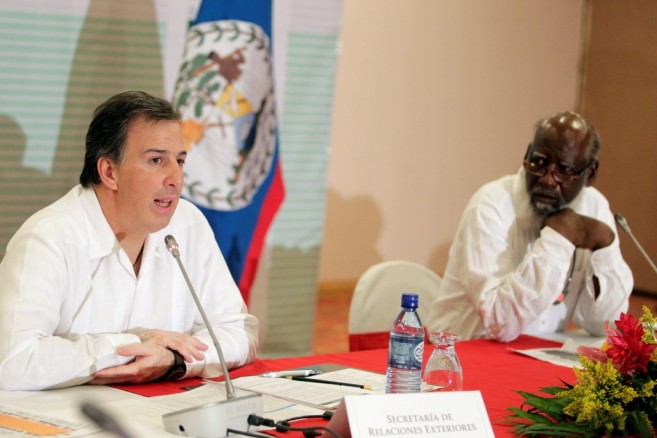 Foreign Ministers from Mexico and Belize signed the following agreements:

· Memorandum of understanding in tourism cooperation.
· Letter of intent between Mexico and Belize to improve the security and cooperation programs at the maritime borders.
· Memorandum of understanding to strengthen the Belize-Mexico High Level Border Security Group (GANSEF).
Among the main actions that were announced at the end of the Meeting, the Mexican and Belizean Delegations highlighted:
Creation of a Political and Multilateral Consultation Mechanism, through which both countries strengthen the bilateral dialogue.
The organization of a regional reflection forum on the Central American integration process.
Strengthening of the regional integration of the Southeastern area of Mexico with Belize.
Steps forward in cooperation on water and sanitation.
The formation of a technical group comprising Naval Authorities to monitor the Bilateral Cooperation on Maritime Security, training and professional education on hydrology, human security at sea, search and rescue, protection of marine ecosystems and operational capacity.
Negotiation of a partial scope agreement and endorsement of the commitment to finalize a Memorandum of Understanding on land transportation of cargo, passengers and tourism. 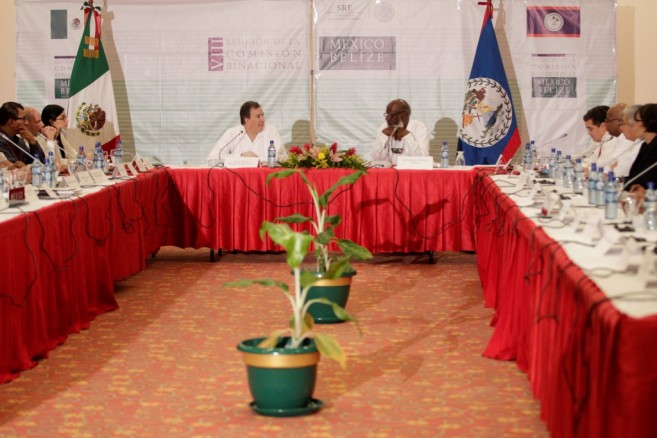 To include in the 2014-2016 educational and cultural cooperation program, different projects on technology, higher education, teacher training, teaching and learning of English and Spanish, copyright, cultural heritage, management and development of archaeological sites, promotion of culture, youth and sport.
The signing of the 2014-2016 Scientific and Technical Cooperation Program, which is expected to strengthen the agenda through a compact portfolio of projects reinforcing the strategic relationship.
Review of the negotiation of a cooperation agreement for ontological medical care between the Ministry of Health of the Mexican State of Campeche and the Ministry of Health of Belize. 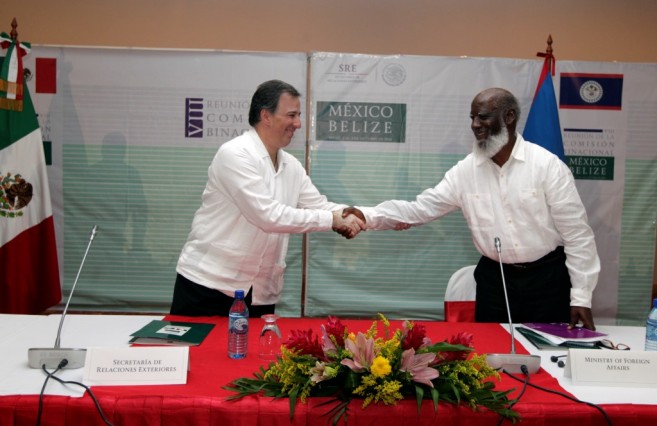 To improve the application process for the Regional Visitors Card (border card) that the Mexican Government issues to Belizean nationals.
These results are the outcome of the discussions held by the different subcommittees that are part of the Bi-national Commission: Economic, Trade and Financial Affairs; the Joint Commission for Technical and Scientific Cooperation; Educational and Cultural Cooperation; Immigration Group; and the Mexico-Belize Transport Authorities Group.
The objective of the 8th Meeting of the Bi-national Commission was to boost the strategic relationship and to review in detail the bilateral agenda in the political, economic, social, security and cooperation areas.
This meeting had a renewed focus, as it was attended by local authorities from the Mexican States of Campeche, Yucatan and Quintana Roo, in order to finalize and design an agenda with Belize to boost the overall development of border communities of both countries and thus achieve a prosperous and secure border.
Mexico and Belize are joined by a border of over 200 kilometers. Between the two countries there are two formal international crossings that register 500,000 people a year, and an annual volume of 1.35 million trucks and cars.
The trade and economic relation between Mexico and Belize registers a sustain growth. In the past ten years (2003-2013) the bilateral trade grew at an annual rate of 9.7%, from 62 to 156 millon US dollars, an increase of 252% during that period.
Mexican Foreign Minister Jose Antonio Meade highlighted before the Mexico-Belize Bi-national Commission that “both countries must intensify their efforts to boost their trade and investment relations, which currently do not correspond to the full potential of two bordering countries”. 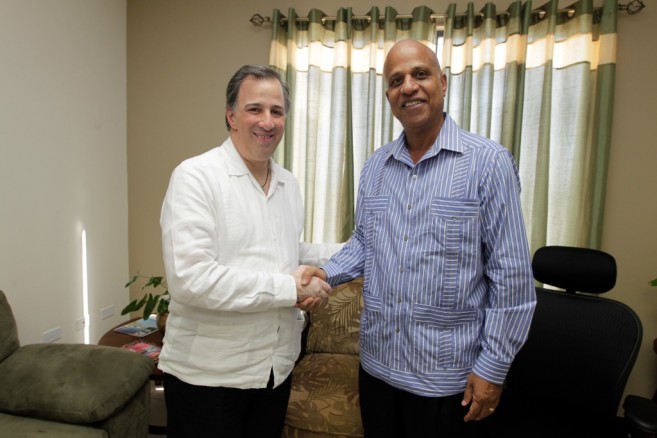 Therefore, Minister Meade said, it is essential to analyze the creation of mechanisms that facilitate trade and that allow also moving forward in improving border infrastructure which should be consolidated as a space for regional development.
“Mexico wants to strengthen economic ties with Belize and seeks business opportunities from both trade markets that complement each other, from the regional level to key sectors and industries, such as construction, Information and communications technology and agriculture machinery”, added Foreign Minister Meade.
During his work visit, Mexico’s Minister of Foreign Affairs was accompanied by the Director General of Mexico’s Social Security Board (IMSS), Jose Antonio Gonzalez-Anaya, and led a Delegation that included federal high officials from the ministries of Interior, Navy, Tourism, Economy, Agriculture, the Water Board and the Internal Revenue Service (SAT).