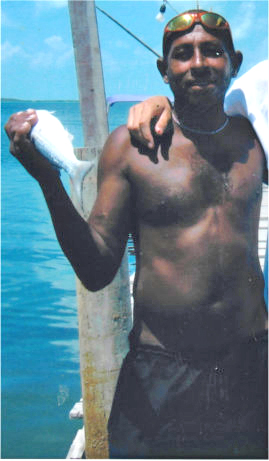 Late last year, the San Pedro Town Council (SPTC) and the Police Department, working along with substance abuse advocacy groups, made a decision to round up members of the community and incorporate them into a rehabilitation program. It was a decision made in an effort to reach out to those members who have been taken over by alcohol and drugs and whose health was deteriorating because of substance abuse. 57 year-old island resident Luis Junior Daniels, AKA ‘Hule’, was one such individual. On February 9th Daniels succumbed to his alcohol addiction when he died of cirrhosis of the liver due to alcohol abuse.

Sometime before 2PM on Saturday the 9th, the body of well known “Hule” was found on the first floor steps of a concrete three storage building located on the beach behind the San Pedro Town Council building. The body was found in an advanced stage of decomposition and had to be quickly removed to an isolated area for an onsite postmortem examination. The deceased is originally from the Corozal Town but had been living at an unfixed address in the San Pedrito area in San Pedro. Daniels was unemployed and many that knew him were aware of his struggles with alcohol addiction. Doctor Giovanni Solorzano certified his death as being cirrhosis of the liver. Cirrhosis is a deadly disease which can be caused by a number of factors, including years of heavy drinking.

According to police, Daniels might have passed away sometime in the early morning of the 9th or late the night of February 8th. Although a specific time for the passing is not sure, police believe that the reason the body was not found until hours after he died was due to the fact that he was regularly sighted sleeping in random places and people who saw him thought that he was just asleep. Family members in Corozal explained that Daniels was not homeless since he had a home in Corozal Town, as well as many family members who cared for him up to the time when was hospitalized a week prior to his death. “He wanted to live that way but he had a family and he had a home. He had people that loved him,” said Daniel’s cousin. Because of the advanced state of decomposition, his family was unable to transport Daniels body to Corozal Town and he had to be buried on the island. Arrangements were made with the assistance of the San Pedro Town Council to have the body buried at the San Pedro cemetery on Sunday, February 10th.

According to San Pedro Alcoholics Anonymous (SPAA) the unfortunate death of Daniels is only one of the few examples that highlight the sad results of substance abuse. The institute highlighted the fact that there are many other men and women that share the same lifestyle of Daniels, and for that reason the institute strives in reaching to those people. Institutes such as the San Pedro Alcohol and Drug Abuse Institute (SPADAI) have taken initiatives to help persons that have fallen under drug and alcohol addiction. Their ultimate goal is to aid these individuals until they overcome their addiction and become productive citizens in the community. SPADAI, along with the SPTC and the San Pedro Police Department started a program where addicted men and women are sent for addiction recovery to nearby rehabilitation centers on mainland Belize or if need be, outside of the country. SPADAI is also working on having a rehabilitation center built on the island to assist persons that have been influenced by addiction and are seeking help. The proposed site for the center is close to the marina at the south end of the DFC area. It is the belief of SPADAI that a rehabilitation center on the island would be beneficial in helping persons that suffer from addictions in order to receive immediate attention to their problems. There is also the SPAA group on Ambergris Caye that aims to assist persons addicted to alcohol to cope with their addiction and in the long run, stop drinking. SPAA is of the strong belief that alcoholism is a pressing matter that needs to be addressed before it gets out of hand. According to the organization, everyone chooses their way of life and it is hard to help a person that is not seeking help. Persons that are seeking assistance for themselves or relatives can contact the SPAA at 226-4464 or 600-9061. Meetings are Tuesday and Fridays at 12 noon, and Sundays and Fridays at 7:30 pm at the Roman Catholic Church Rectory on Barrier Reef Drive. The meetings are free of charge. For more information on SPADAI interested persons can email [email protected]

The Daniels family would also like to thank the San Pedro Town Council for all their assistance offered to the family. The family also takes the opportunity to thank the priest at the Roman Catholic Church for his kind words of support and comfort, as well as for always opening the doors of the Rectory for Daniels.

Government introduces new COVID-19 restrictions, some exceptions for the islands