Home » Health » Is Sargasso causing health issues on the island?

Is Sargasso causing health issues on the island?


Sargasso has once again invaded the shores of Ambergris Caye, and island residents are concerned about the health hazards that come with it. Not only is the accumulation of seaweed unattractive, but it also produces an unpleasant smell, often compared to that of rotten eggs. In addition, residents are claiming that Sargasso is impacting their health. 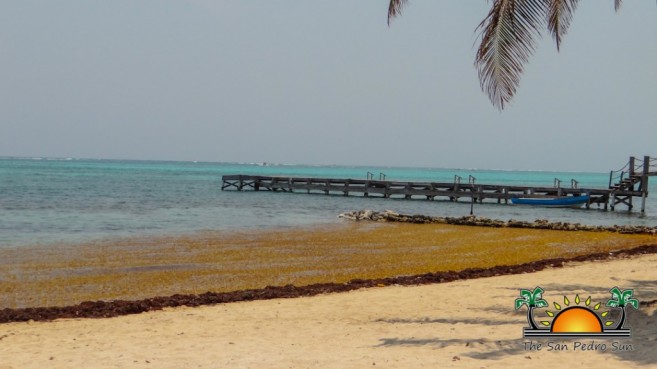 According to Dr. Javier Zuniga, decayed Sargasso produces a toxic gas, which can have an effect on people’s health, especially those who are sensitive. “When the seaweed decomposes in the sea, it releases hydrogen sulfide, and produces bacteria that can result in mild skin rash or irritation. It can also cause the eyes to be irritated. The gas is colorless, and therefore, difficult to prevent from inhaling. Sensitive people are most at risk, including babies, the elderly, and those with breathing complications,” said Zuniga. He said that Sargasso only poses a health risk whenever the seaweed is damp. When the seaweed is dried, especially during the summer months, it does not release toxic gas.
Although Zuniga said that there has been no indication of increased health effects due to Sargasso at the Dr. Otto Rodriguez San Pedro Polyclinic II, one island resident Lara Goldman says otherwise. “Whenever I am in the open, and outside my house, my eyes begin to burn. It also has made my heat rash flare up, and I’ve been treating it daily with eye drops and skin creams,” said Goldman to The San Pedro Sun. 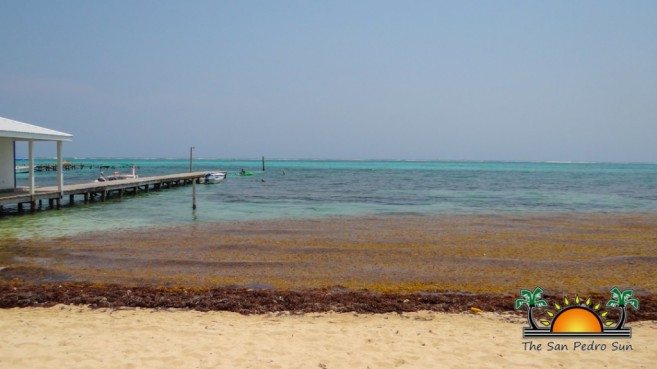 Another island resident claims that she has gotten asthma from Sargasso. Zuniga stated that it is possible for a person to get ill if they inhale the sulfide gas in unventilated areas. “The inhaled gas has the possibility to affect the person’s respiratory system. I recommend they see a doctor and be evaluated to treat their symptoms,” said Zuniga.
Beachfront residents have an additional issue. Man-made seawalls have an additional impact on the stagnation of the seaweed, as the seawalls shift the sea’s natural flow. As such, Sargasso collects in massive amounts on their beaches. After fruitless attempts to deal with the issue through government authorities, residents have had to resort to personally removing the Sargasso.
The San Pedro Town Council (SPTC) has stated that they are seeking to address the issue. Mayor Daniel Guerrero acknowledges that Sargasso contributes to beach erosion, and is an environmental risk. The unwanted seaweed is also affecting our tourism product aesthetically, and the SPTC is currently working to address the issue with the guidance of Cuban Ambassador to Belize, Lisette Perez. As Cuba has more experience in handling natural disasters and beach-related issues, Perez and Mayor Guerrero are currently preparing final plans to get rid of Sargasso by recycling it, and using it as landfill. 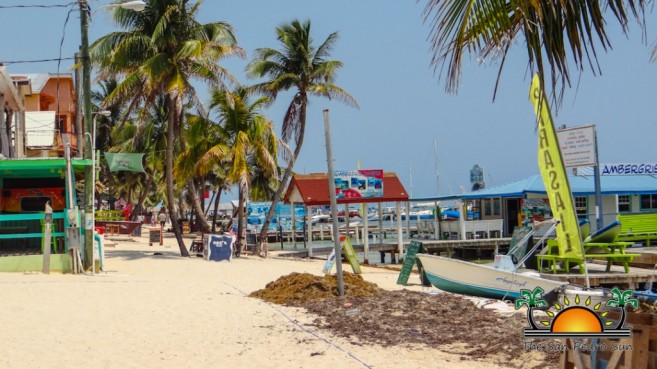 In addition, other entities like the Belize Tourism Industry Association, the Ministry of Tourism, the Belize Tourism Board, the Department of Environment, along with other agencies, have formed a Sargasso Task Force to reduce its negative impacts. Some of their ideas include: creating a monitoring system with geographic information system technology; issuing a pamphlet with general information on the Do’s and Don’ts of Sargasso; and are working to find specific areas, including San Pedro Town, where Sargasso can be controlled and safely disposed. The Government of Belize is also considering to support and provide assistance to the private sector by providing trucks to dispose the Sargasso.
Although a nuisance to many, Sargasso has many benefits, such as providing a food source, home and shelter to various marine life, encouraging plant growth, and is used as biofuel and land fill.
In the meantime, the SPTC, along with most businesses and resorts along the beach, continue to try and keep our beaches clean. If you would like to make a positive difference in the community, you may join The Phoenix Resort in their weekly Saturday beach clean-ups. For more information on how you can get involved, please contact them at 226-2083 or visit them on Barrier Reef Drive.

Letter to the Editor: Jan Brown