Press Release – Government Press Office – October 30, 2012 – On Monday October 29, 2012, a new Police Sub-Station was inaugurated in the village of San Roman in the Orange Walk District.

Financed by the Government of Belize, the building was constructed within six months at a cost of $285,000. The top floor is living quarters for the Officer in Charge and his family, while the ground floor houses a public area, offices for the Police, a cafeteria, dorms for Police officers, and a cell block.

In his address delivered at the inaugural ceremonies, Minister of National Security Hon. John Saldivar stated, “We will continue to equip our Police Officers across this country, so that they can deliver the best possible service to you the People of Belize.” 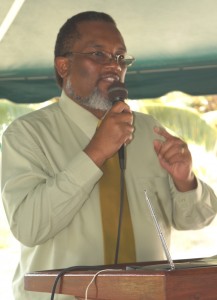 “It is without a doubt that we face in these challenging times a serious crime crisis across this country,” Minister Saldivar added. “That crime crisis is not one that appeared in only the last few months, or even the last few years. It is one that has been in the making perhaps for decades. And it will not take one day, a week or a month, or even perhaps a few years to solve this problem. It will take all of us working together, Government and community to solve the crime problem that faces us today.”

In closing, he told the villagers present: “I join the Commissioner of Police in asking you, the wonderful people of San Roman to help your Police here in your village, work along with the Police in your village, not only to maintain the building that we have, but also cooperate in order to fight crime in your area.” 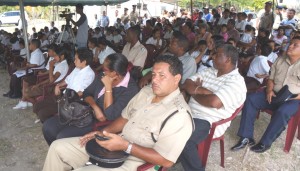 It is expected that the new Sub-Station will enhance the ability of law enforcement authorities in countering illegal cross-border activities along the Rio Hondo and to provide general Police services to San Roman and neighboring villages. This area had been without a Police station for more than six years.