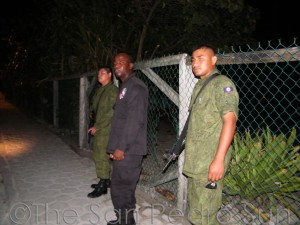 The San Pedro Police Department has officially launched its Christmas Season anti-crime campaign as part of the policing plan for the Christmas holidays. The campaign started on Saturday December 1st and will run through January 15th, 2013. The campaign launched by the Police Department is geared to have more police visibility during one of the busiest times of the year when visitors and shoppers prepare for the Christmas holidays.
When speaking to The San Pedro Sun, the deputy Commanding Officer of San Pedro Police Formation Inspector of Police Reynaldo Pook explained that following the launching of the Christmas anti-crime campaign, there has been more foot and mobile patrols, especially in the business sector of town. In addition, there have been more concentrated patrols on the northern and southern sections of the island. “With the increase of shoppers and visitors, we want to ensure that the island is as safe as possible,” said Pook. He added, “We will also do vigorous stops and searches including check points where we will be targeting all sort of traffic offenders.” 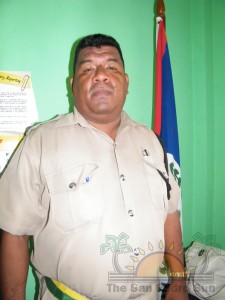 For that reason, Inspector Pook is advising, “We will have increased vigilance on the street so we want to advise drivers to have a designated driver when citizens want to go out partying or drinking. Doing so will avoid you being arrested for drunk driving,” said Pook. According to Pook, with the assistance of auxiliary police and periodic assistance from mainland law enforcement officers, there will be increased vigilance on the streets. But the police are also cautioning the community and property owners to do their part in making the work of the police easier. “We want to advise our residents that if they are leaving the island over the holidays, to have someone look over their place. Those that are using lights to decorate their homes and property, we want them to ensure that they have proper electrical connection to avoid the chances of causing a fire. Finally, we want our residents to report anything that looks suspicious in their neighborhood or surrounding; this will help avoid crime,” said Pook, as he outlined the police anti-crime measures for the next month.
The San Pedro Police Department wishes the community and the country a merry and safe Christmas and a prosperous 2013. The police assure the public that during this season, they will be working even harder to ensure the safety of the island.