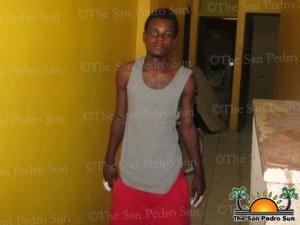 On Thursday, November 26th, Florentino Velasquez, also known as Papaito, was found guilty on one count of aggravated burglary and three counts of grievous wounding at the San Pedro Magistrate Court. Velasquez had been charged for the crimes back in September 2014 after he broke into a home and assaulted retired US nationals Douglas Kelly and Gail Neal. San Pedro Magistrate will officially announce Velasquez’ imprisonment period on Thursday, December 10th during his final court session and sentencing.
Velasquez, who was no stranger to San Pedro Police at the time, had broken into the couple’s apartment in the Tres Cocos Area and wounded three persons. The incident occurred on September 12, 2014 shortly after midnight when Velasquez forcefully entered the apartment through the front door, attacking Kelly and later Neal with a kitchen knife. Kelly received two cut wounds to the stomach, three cuts over the left eye and four cuts on top of the head, while Neal received injuries to the left eye and mouth. A neighbor of the couple who tried to aid them, Thomas Fiorille, was also injured in the incident by Velasquez. Fiorille sustained cut wounds to the chest and wrist.
Even though Velasquez was able to escape after the incident, police managed to apprehend him three days later on September 15, 2015 when he was officially charged for his crimes. Velasquez was remanded to the Belize Central Prison but later came out on bail and committed yet another crime, this time robbery. Police once again arrested and charged Velasquez for the crime of robbing 24-year-old Allison Holmes, an American Forest Ranger on June 20, 2015.
After being sentenced, Velasquez will return to court to face additional charges for the other crimes he is accused of.