« Older: Editorial: Do you CARE? Then VOTE!
Newer: » History made; San Pedro’s first ever mayoral debate a success 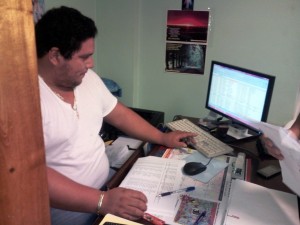 The Elections and Boundaries Department in San Pedro has come under fire after a UDP councilor candidate was found using the department’s computer way beyond working hours. The incident unfolded shortly after 7PM on Tuesday January 17th, at the Election and Boundaries office situated on the second floor of #63 Barrier Reef Drive.

The incident prompted the People’s United Party, the Vision Inspired by the People and San Pedro Independent Mayoral Candidate Melanie Paz to officially comment on the issue.
The Councilor Candidate involved in the incident is Severo “Severito” Guerrero. Guerrero told The San Pedro Sun over the phone that he was assisting the election’s officer with a computer problem.

The Election and Boundaries Department is aware about the information and is expected to make a statement later today. Read full details of this story in this week’s issue of The San Pedro Sun newspaper.