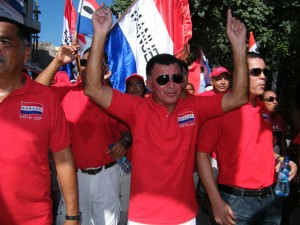 The United Democratic Party Belize Rural South Standard Bearer was duly nominated this afternoon at the San Pedro Town Council. Heredia was accompanied by a sea of red supporters that came out to show support to the two-term Area Representative.
Moving from in front of the San Pedro Town Council shortly after 2PM, the large multitude slowly made its way through the main streets of San Pedro Town. Blowing horns, blasting loud music and chanting, the jubilant crowd of supporters walked Heredia to the council. Once at the council, Heredia walked up the council’s office and was duly nominated before the Election’s Day returning officer Allan Gennity. Heredia was nominated by Joseph Elijio, Claudio Azueta, Maria Elsa Paz, Lisa McCorkle, Erico Novelo Jr. and Fernando Sosa.
Shortly after being nominated, Heredia said in an interview that he is confident that he will be victorious on Election Day. Enjoying the individual support of six of seven Village Council members of Caye Caulker and the endorsement of Ramon Reyes, who lost the PUP convention against Anna Patricia Arceo, Heredia said that the demonstration of support is indicative of him being successful at the polls. “While I don’t want to come across as over-confident, I am sure that the people of Belize Rural South will re-elect me as their representative,” Heredia said.