« Older: Over 6500 Cayo North voters to go the polls in by-elections today
Newer: » VIP to contest municipal elections in San Pedro with a full slate


The United Democratic Party’s (UDP) Dr. Omar Figueroa is the newly elected Area Representative for Cayo North after defeating his opponent, the People’s United Party’s (PUP) Richard Harrison in a historic by-election. Figueroa captured 65.7% of the 4063 total votes cast on Monday January 5th. The announcement of the results culminated a long day of arduous work for the two political parties, who had campaigned hard the weeks leading up to the by-election, and who had set up political machinery to bring out the electorates on Election Day.

Throughout the day, Figueroa was flanked by senior elected Cabinet Ministers including the Prime Minister of Belize, Honorable Dean Barrow and other key political elements. Through the UDP Secretariat, the incumbent party transported hundreds of party supporters including candidates for the upcoming municipal election from across Belize to the Cayo North constituency to boost Figueroa on by-election day. PM Barrow told The San Pedro Sun that for the UDP, it was a strategy to send a message that the UDP is united and ready to “Take back Cayo North” from the opposition PUP.

For its part, the PUP appeared smaller in strength and numbers as their political machinery did not kick into full gear until late in the morning. While Harrison counted on the support of the rank and file of the PUP and the PUP elected parliamentarians, the PUP did not mobilize en masse, and seemed to bank on the public sentiment of the “UDP unpopularity.” According to PUP Party Leader Francis Fonseca, the UDP show of numbers is indicative of the “millions of dollars” the UDP has to invest in regaining Cayo North, something that the “PUP does not have.”

While the show of crowd was important to establish strength, what counted was the decision of the 6598 registered voters of Cayo North. Polling Station 73 at Sacred Heart Primary School in San Ignacio Town, has a total of 5056 legible voters, while Polling Station 75 situated at Immaculate Conception RC School in Bullet Tree Falls Village has a total of 1542 registered voters. Throughout the 11 hours that the polls remained open, a constant stream of voters entered to cast their votes. Hourly counts showed a trend of an increase of voter turnout approximating 200 and 75 at the two different polling stations respectively. In the last hour that the polls remained open, voter turnout ballooned from 200 to almost 1000. 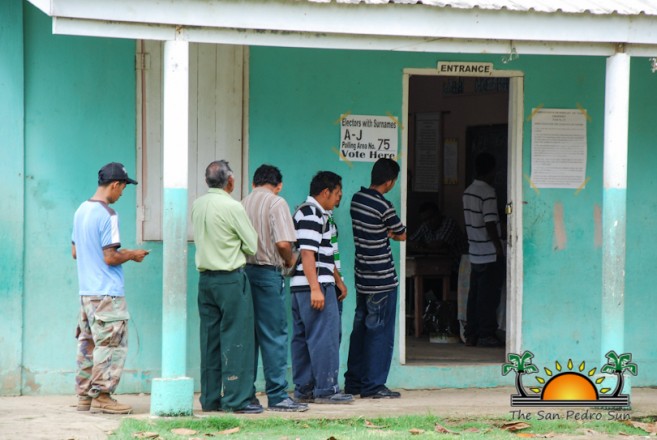 At the closing of the polls at 6PM, 4063 votes were cast, which represent 60.81% of the total number of registered voters in Cayo North, an area that represents a large part of San Ignacio Town and Bullet Tree Falls Village. Just around 6:30PM, under heavy police escort, the ten ballot boxes containing the ballot papers were escorted from Polling Station 73 to the Center for Employment Training (CET) Building for reconciliation of the ballot papers and counting. Under similar protocol, the three ballot boxes were transported from Polling Station 75 to the counting station. Shortly after 8PM, all 13 ballot boxes were reconciled and counting began simultaneously

First to emerge from the counting station for the UDP was Hon Anthony “Boots” Martinez who confirmed Figueroa’s large margin lead. With his public announcement, which was carried live on the various media houses, the sea of UDP supporters that had gathered erupted into celebration. Moments later Figueroa, who had been joined by PM Barrow, came out to address the multitude claiming victory. “This is a win for the people of Cayo North. For too long the people of Cayo North have been left out. It is a shared level of acceptance and responsibility by the two parties but with fresh leadership, we will see a new chapter,” said Figueroa.

PM Barrow, in addressing the media following the release of the result said that UDP victory is indicative of the party’s popularity. “We are committed to the development of this country and the people once again showed us that they believe in the UDP. We will now go towards the municipal election… I do not want to sound over cocky, but I believe that the UDP is on a winning train,” commented the PM.

With Figueroa’s victory, the UDP now increases their majority in the House of Representative from 17 to 18 parliamentarian seats. Figueroa is expected to be sworn in as the new Area Representative for Cayo North before the end of the week. PM Barrow did say that he does not foresee a re-shuffle of his Cabinet anytime soon with the election of Figueroa, who holds a Doctorate Degree from the University of Florida and has been a leading advocate in jaguar preservation in Belize.
The bi-election went through without any major incidents.

Statement by Dr. Senator Hon. Carla Barnett at the United Nation’s Meeting of the Ministers of Finance: Financing the 2030 Agenda for Sustainable Development in the Era of COVID-19 and Beyond