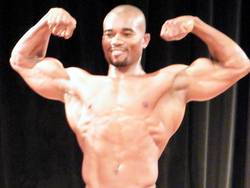 The Bliss Institute of Arts was filled with enthusiastic onlookers and fans that were pretty vocal in their choice in each competition. Introduced in 2004; the female figure competitors were judged on overall athletic appearance of the physique; which takes into consideration the entire physique, beginning with a general presentation, facial features, overall athletic development of the physique, and the ability to present a balanced symmetrically physique. The condition of the skin and skin tone and the athletes’ abilities to present themselves with confidence, poise and grace were also key factors in the decision making process.

At the end of the competition, the judges decided on the winners as follows: 1st place, Kayla Myvette; 2nd place went to Kaima Martinez; 3rd place, Olga Vidas and 4th place went to Gina Lovell. While the audience did not appear to be pleased with the outcome, the judges’ rule was final.

The male body building competition had two levels: the under 170lbs and the second level was for body builders measuring over 170 lbs. These competitors were judged on overall shape. In this, the judges should favor competitors with a harmonious, classical physique. The judges look for good posture and athletic bearing, correct anatomical structure (including body framework, broad shoulders, high chest, correct spinal curves, limbs and trunk in good proportion and straight legs). The judge also look for good skin tone with an absence of surgical or other scars, spots, acne or tattoos, which the IFBB (International Federation of Body Building) considers as a skin blemish, tidily dressed hair, well-shaped feet, and toes. When having difficulty in placing two or more competitors who seem to be on the same level, the judges look for faults in those aspects listed above which will help to differentiate among the competitors.

At the end of the two competitions, the winners were as follows:

All competitors in the various competitions received trophies. While the judges deliberated, San Pedro resident, Cindy Ayala had a chance to awe the audience with a 90 second pose presentation which saw her flexing the various muscles that she has trained tirelessly to acquire. Initially, Cindy was slated to compete in a Female Body Building competition which should have been part of the competition; however no one else signed up for the competition. Cindy hopes that her presentation will serve to inspire female competitors in up-coming competitions.

San Pedro’s Edwin Ramirez brought home the Mr. Belize Body Builder 2010 Trophy as well as placed 2nd, in the Mr. Hercules Competition; a pose off between the two first place winners, Mr. Deon Danderson and Mr. Edwin Ramirez. On Tuesday, November 9th, 2010, in an interview with The San Pedro Sun, Edwin informed us that he was honored to have been able to capture the title of Mr. Belize in the over 170lbs competition. While he hoped to have been able to win the Mr. Hercules title as well, he was optimistic that in the year 2011, he would “take the whole cake”.

However, in an interesting turn of events, on Wednesday November 10th, The San Pedro Sun received a press release stating that the judges’ scores and statistics were revisited and some of the results were affected. In the female figure, the results are as follows: 1st place- Kayla Myvette, 2nd place- Gina Lovell, 3rd place- Olga Vidas, and 4th place- Kaima Martinez. Furthermore, in the competition for the Hercules trophy, those scores were re-checked and the overall winner in the competition was in fact San Pedro’s, Edwin Ramirez, and not Deon Danderson as previously mentioned at the event. The San Pedro Sun congratulates all the competitors, especially our two San Pedro representatives, Edwin Ramirez and Cindy Ayala.