The organizers of the Local 11-A-Side Football Tournament is pleased to congratulate the winners of the competition and thank the sponsors of this year’s tournament. The competition concluded on June 16th with the final game played between Legends FC of San Pedro Town and Caye Caulker Tsunami. Following the second game in the finals, Legend FC won by an aggregate goal score of 5 to 4 over the Caye Caulker team.

The championship title was disputed in a home and away game at the Ambergris Stadium. In game one, Legends FC blew out Tsunami in a 3 to 0 goals game. In the second game, Tsunami scored four goals while Legends mustered two: by aggregate score, Legends won the championship. 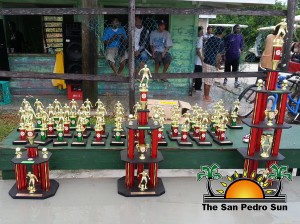 Organizer of the tournament, Elvis Budna took the opportunity to thank the sponsors of this year’s competition and all those who played a role in making it possible, including Agua Dulce, Victoria House, Hummingbird Furniture, Captian’s Morgan, Harmouch Center, Motorcycle Parts, Royal Caribbean Resort and Dalia’s Store. Congratulation to all teams that participated in this year’s competition and kudos to the sponsors for making the tournament a reality!