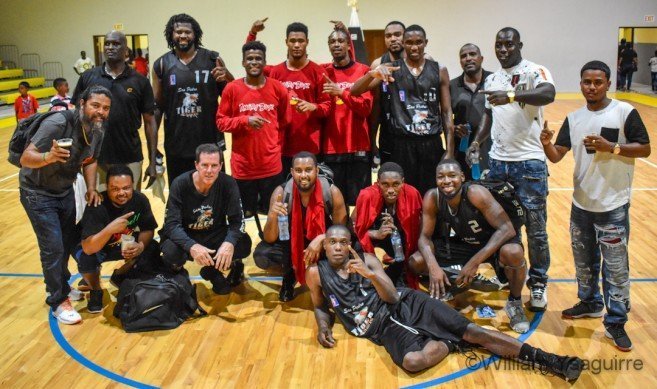 San Pedro Tiger Sharks are just one game away from the 2019 National Elite Basketball League (NEBL) Tournament’s finals, after defeating Dangriga Dream Ballers on Friday, April 26th. As the playoffs began over the weekend, the island team was able to strike first in the best-of-three semi-final games. On Saturday, May 4th, they will have the opportunity to seal their ticket to the 2019 NEBL’s championship as they face Dangriga Dream Ballers for the second time in a home game that will take place inside the Civic Centre in Belize City.

The first game in the semi-finals saw the island team traveling to Dangriga Town in the Stann Creek District, where they faced a tough Dangriga Dream Ballers. The ambiance at the Russel Chiste Garcia auditorium was intense as a large crowd showed up to support the home team. San Pedro Tiger Sharks was able to jump to an early 20-15 lead, which they increased to 41-33 by halftime.

Against the odds of a loud venue and facing the #2 seed team in the tournament, the island team maintained this lead throughout the remaining of the game, grabbing a 78-69 victory. The Tiger Sharks was led by Jihad Wright who had the game high with 23 points, 12 rebounds, two assists, and two steals. Martevious Adams and Ashton Edwards finished the game with 14 points each. Francis Arana netted ten rebounds, six points, five dimes, and four steals, while Keith Pollard netted eight points. With this win, the San Pedro Tiger Sharks are just a game away from competing in the 2019 NEBL finals for the fifth time in the tournament.

The defending champions, Mirage/Smart Belize City Hurricanes travelled to San Ignacio Town, Cayo District that same Friday evening, April 26th to face the NEBL’s #1 seed team, Verdes. At the end of the first quarter, Hurricanes led by one point and extended it to a tight 43-41 heading into intermission. During the third quarter, Verdes regrouped and grabbed a 64-54 lead going into the fourth and final quarter of the match. However, costly turnovers near the final minutes of the game allowed Hurricanes to close the gap, winning with a tight 78-76 point game. Hurricanes will now try to secure its spot for the finals on the return game for Friday, May 3rd in Belize City.

The teams that advanced to the finals will then compete in a best-of-five series. The team with the most wins will become the 2019 NEBL Champion.

Upcoming games this week:
Friday, May 3rd-Verdes vs. Mirage/Smart Belize City Hurricanes
Saturday, May 4th-San Pedro Tiger Sharks vs. Dangriga Dream Ballers
Both games will take place at the Civic Centre in Belize City and will start at 9PM.

All scores, standings, player statistic and team statistics can be found online at neblbelize.com

Finals draw near for the San Pedro Volleyball Tournament playoffs