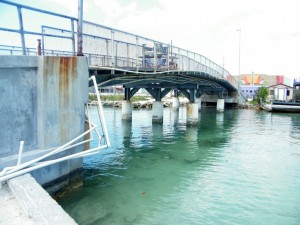 On Saturday, February 25th, 2006, San Pedro witnessed the inauguration of the long awaited Sir Barry Bowen Bridge. Now, six years after, work is in progress for a complete facelift, which will see the complete replacement of the present metal platform of the bridge. Engineers were on the Island on Saturday, April 14th assessing the present situation of the bridge. The present triple span bridge measures120 feet long and 23 feet wide was exclusively for the use of golf carts, bicycles and pedestrians. It was constructed at a reported cost of BZ$750,000 and built in a mere four months by a crew of around 30.

Doug Walker, Civil Engineer based in Belize City and the engineer that was tasked with the design of the renamed Sir Barry Bowen Bridge was contacted to advise on the renovation options of the bridge. “This is an informal meeting with the mayor and the contractor who built the bridge. We are at very early stages but the focus of discussion is how to reinstate the Barry Bowen Bridge back to its original condition.” 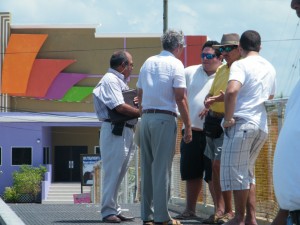 From walking across the bridge, one can easily view the deplorable condition of the bridge, Engineer Walker stated; “The condition of the bridge looks very bad. In-fact, I would almost say alarming. But that’s just appearance wise. The main structure of the bridge is in very good condition, however. And the amount of maintenance needed on the main structure beams and elements is pretty minimal. The problem is the deck. The deck is as you can see, very badly corroded and we’ll need to be completely replaced. That’s for a variety of reasons of course. This is because of the salt air but it’s also because of the build up of sand that you can see on a lot of the membranes here. The sand acts like an abrasive fit. It takes off any kind of a coating that you would want to put onto the steel to protect it, and once you take off the protective coating, the rust sets in very quickly.”

In speaking of where the original contractor went wrong, Walker stated; “I don’t think it’s the contractor that went wrong. I think it was partly myself to blame, as I was employed as the designer. We did know how severe the salt was going to be, but what we didn’t predict was how badly the blowing sand was going to affect it. The sand, combined with the wheels of the golf carts and other vehicles basically stripped the coating off of the deck. And then of course once you don’t have the protection on the steel then you see the rusts very quickly. There are solutions, I mean we could have gone to stainless steel but then the bridge might have been three or four times the cost it was, and it wouldn’t have been affordable.”

This time around, the engineer has suggested a more durable solution that is light weight, cost effective and requires minimal maintenance. “We are looking at other materials now that will not corrode; such as hardwood and fiberglass, different types of plastics. That’s what we’re going to try and I think this time with a bit of thought it’s going to give a much longer life.” When asked whether concrete would be a feasible option, Engineer Wagner stated, “The problem with putting a concrete deck on this bridge is the weight factor as concrete is very heavy and this bridge was never designed for that. What we want to try is to keep the solution as lightweight as possible, consistent with enough strength to take the weight of the vehicles. We are looking at fiberglass and timber at the moment.” 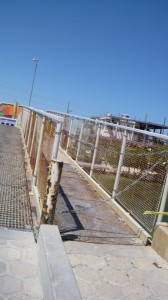 According to Wagner, the construction phase of the new deck for the Sir Barry Bowen Bridge will cost around $200,000 to $300,000 and should take about six months to complete construction. He also spoke about the importance of maintenance to ensure the longevity of the bridge. “I think one of the main topics of discussions this afternoon with the mayor and with the minister has been the maintenance issue. Anything that you build needs to be maintained. I think an increase in the amount of maintenance that’s done on the bridge will pay off, and we’ve already had discussions with the mayor on what needs to be done and in terms of regular maintenance, which basically just comes down to cleaning and re-painting once or twice a year.”

In speaking to The SPSun, Mayor of San Pedro Town Daniel “Danny” Guerrero explained that the council has two options of financing the repair of the bridge. One of the options is consider a low interest loan that has been offered to the council by two different recognized and well established business people in San Pedro Town. Another option would be for the council to explore and analyze if the council can take out monies from its general coffers to finance the project. Mayor Guerrero said however, that whatever decision is taken, all options will have to be set before the entire council for recommendation, reviewed and a final course of action decided.

The mayor explained that he expects work to commence on the bridge within the next three months.