« Older: No Alcohol to be sold on Good Friday!
Newer: » The Great Blue Hole, Makes Top 10 List of Diving Locations In The World

The Attessa IV has been adrift off Ambergris Caye outside the Belize Barrier Reef since early Tuesday, April 10th with the world’s second richest man on board. Aboard the 330ft private super yacht is Bill Gates along with six family members and a crew of 23. The vessel, captained by Sergiy Pashchenko, was given the clearance to navigate into Belizean waters just before mid-morning and has permission to remain in the country until May 9th. 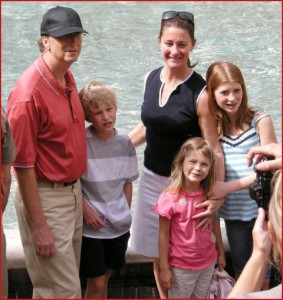 According to sources within the Immigration Department, the vessel was cleared by personnel that flew in from Belize City. The Attessa IV is expected to make stops at various world renowned destinations including Hol Chan Marine Reserve, southern Belize, The Turneff Atolls and the Great Blue Hole.

The visit of Attessa IV and Bill Gates is huge, considering the size and facts of the vessel and similarly important, the person aboard the mega yacht. Firstly the Attessa IV was re-launched on December 2010 and is one of the world’s top 25 private super-yachts by length. It is considered the largest super-yacht to be (re)launched in North America and the 23rd longest private yacht in the world. According to Forbes, the Attessa IV has an estimated value of $250 million. The vessel is able to accommodate up to 36 guests and around 23 crew members. It came equipped with a helicopter which was cleared to fly in Belize. The owner of the impressive nautical masterpiece is industrialist Dennis Washington whose net worth is about $4 billion.

Bill Gates, born William Henry Gates III, is the second richest man in the world. He is a software executive, an American entrepreneur, philanthropist and the chairman of Microsoft. Bill Gates earns US$250 every second which is about US$20 million a day and US$7.8 billion a year.

In January of 2012 the InterAmerican Development Bank (IDB) signed an agreement with Belize under the Salud Mesoamerica 2015 Initiative. The project started with sponsorship from the Bill and Melinda Gates Foundation and the Carlos Slim Health Institute. Annually, Gates donates some $200 million a year to combat disease in various parts of the world.