By Brian Irwin – PLACENCIA, Belize — This is a hot spot for saltwater fly-fishing. While Belize’s northern islands host polished lodges with gourmet meals and groomed bartenders, those to the south remain wild paradises where the fish are plentiful.

Placencia sits on the southern tip of the Placencia Peninsula, a 20-mile-long spit of land with a creamy-green lagoon on the west and the Caribbean Sea on the east. It holds a string of villages with names like Maya Beach and Seine Bight, and still-rustic throngs of shacks that provide a glimpse of what the peninsula must have been like until 1991, when power, phone, cable, and pavement were brought in. Before then homes were lighted by hurricane lamps, and families fished for tuna and lobster and lived in a bartering society where life was simple.

The peninsula has changed dramatically. Cozy cabanas line the beach, inexpensive but refined restaurants dot the sidewalks in town, and large vacation homes are starting to pop up. It’s an area recently discovered by a growing number of expatriates, some with deep pockets. On the northern end monstrous mansions are being erected and a casino will soon open. This paradise, whose amenities are still in their infancy, is on the verge of a tourism explosion.

But offshore, none of that is happening. 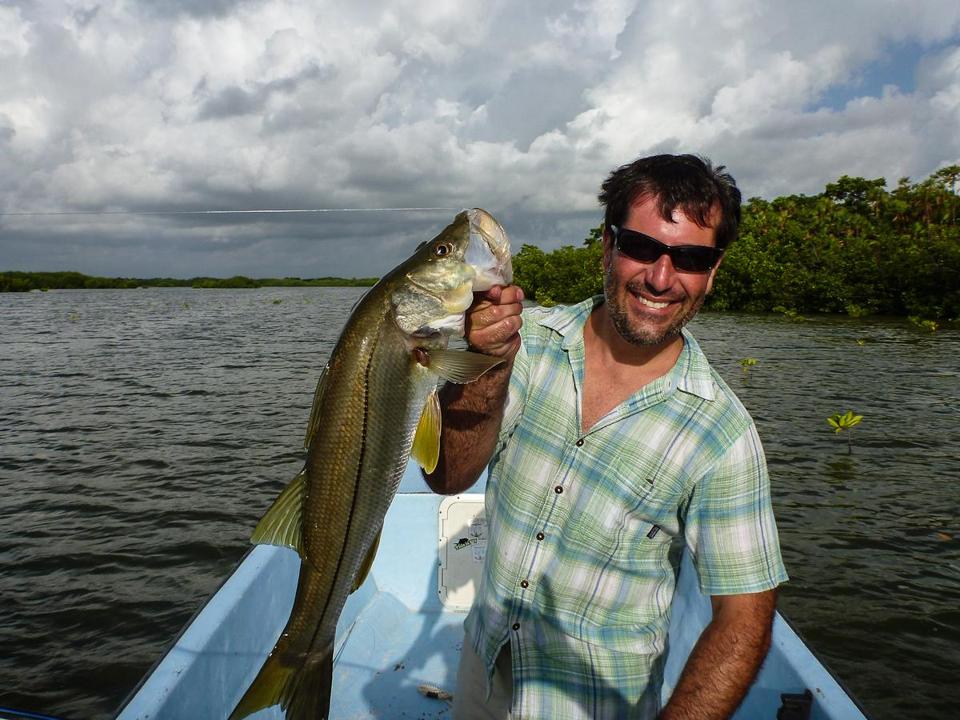 In Belize, the author and his snook, one of the strongest fighting saltwater gamefish and prized by fly-fishermen.

Eight miles off the southeastern coast Julian Cabral, 45, operates Whipray Caye Lodge, a rustic set of drafty bungalows that sit on this private, three-acre isle. Cabral is revered as one of the best saltwater fly-fishing guides in the area for the pursuit of tarpon, bonefish, and permit, three of angling’s most sought-after gamefish.

Life is slow here but the fishing action is not. Shallow “flats,” patches of ocean that are only shin-deep, run thick with permit. Cabral seemed to have X-ray vision, peering through the glare to direct me where to cast as he pushed a battered wooden boat through the water with a long pole. “Tail, three-o-clock,” he’d say. I’d cast, feel a bump, a tug on the line, then nothing. Although we fished all day, they weren’t feeding and we came up with only one. Still, I had one of the best days I’ve ever had fishing. Cabral reminded me, “That’s why they call it fishing and not catching.”

Belize is a diverse country, mostly inhabited by Garifuna, Creole, and Maya people. The Garifuna stemmed from Europeans, blending their genes with West Africans who were brought here as slaves. Creoles have “Indian” blood in them, and the Maya folk date to one of the world’s great cultures, a kingdom that ruled this part of the world for a few thousand years. Belize holds the highest concentration of Maya ruins in Central America, none more spectacular than the giant temples of Xunantunich.

Xunantunich rests on the border with Guatemala in western Belize. We approached the ruin by crossing the Mopan River on a hand-cranked, single-car ferry. A short walk through the jungle opens to a breathtaking pyramid. First explored in 1890, the 130-foot-high stone structure was the epicenter of this civilization, one of the largest Mayan cities in the region. Viewed from the top of the main temple, the clouds seem to stick to the walls of the king’s palace, surrounding the peasant dwellings and forested hills that ripple out from the temple’s courtyard. Aerial ultrasound studies revealed that under this dense jungle, an entire city lies buried, with buildings in a 2-mile radius from its center.

Belize’s thick jungle is a world shrouded in mystery. Few thoroughfares pass through it; in fact there are only three major roads in the country, none with numbers or exits. Most of the other roads are dirt. The Hummingbird Highway, never more than one lane in each direction, slices Belize and its jungle, in two. In the center an ecotourism industry is evolving.

There are few places to stay or visit in the sparsely populated center, yet the area holds spectacular natural discoveries. Misty waterfalls leak through the trees, crystal-clear rivers flow in and out of 3-mile-long limestone caves, their caverns rich in artifacts left by the Maya who revered the spaces as the underworld. We explored the twisted tunnels, lined with stalactites and swirling bats, with a local guide.

To approach the caves, we boarded an old school bus that departed from Caves Branch, a luxurious ecolodge. Driving through mango and dragonfruit groves, we eventually forded a river, hiked to the caves’ opening, and waded upstream. Terra-cotta pots and human bones ringed ceremonial fire pits. After exploring the slick formations we dropped into the inner tubes we carried, and by headlamp floated out of the caves and back into the jungle. Albino catfish and colorful freshwater fish glided beneath our dangling legs.

Caves Branch is an oasis with the country’s largest collection of orchids and a crisp pool that rests among the huge trees of the forest canopy. A series of treehouses, ranging from simple to expansive 1,200-square-foot suites with hot tubs on their roofs and tiled, outdoor showers reach up into the dense system of trees, all accessed by an elevated system of boardwalks.

As plush as Caves Branch is, most visitors come to explore the adventure opportunities that await. Waterfall rappelling and jungle canopy zip line tours are some of the more popular forays. We tried the latter, walking up into the hills and riding down thick steel cables, suspended by pulleys and harnesses, at over 40 miles an hour. One zip line, the longest in Belize, was well over a half-mile.

But I had come to Belize to catch fish. So the night before we left, I called Cabral and asked if he could guide me from 4-8 the next morning. His generator had exploded the day before, so he referred me to his nephew Dermain Shivers, who knows the lagoon, where tarpon, a prehistoric fish that looks like a 100-pound minnow, gather in droves just before sunrise.

Shivers picked me up at the dock in Placencia in the predawn hours and we cruised into a milky bay ringed with mangrove trees. There, under the glow of the moon, flashes of silver blinked just under the surface and the water roiled with feeding fish.

I peeled out line and cast a popper, a fly that looks like a decorated cork, into the pod. In a thrash of whitewater a fish was on. Line peeled out, it jumped once high in the air, spit the fly, and was off. For the next two hours I’d cast, tease my fly across the water, and yard hard on the plate-like mouths of one of the world’s best gamefish, landing about 10 percent, a respectable figure for this elusive fish.

When the water settled, Shivers pointed. “Ray,” he said. Snook, one of the most exciting fish to catch on fly, tend to rest in turbid water, often on the backs of stingrays. I cast to the ray’s shadow, popping the lure across the surface. Like a triggered landmine, the water erupted, the ray bolted, and thick cord screamed from my fly reel, spinning salty water into the rays of the rising sun.

Belizeans still need a visa to travel to Canada