“The media is a key partner in shaping the image of a country,” highlighted Marcelo Risi Principal Media Officer of the United Nation World Tourism Organization (UNWTO) in his opening remarks at the International Seminar for tourism stakeholders and media houses held in Guatemala City on the 14th and 15th of January. The purpose of the workshop was to look at crisis management and its effects on a country’s tourism industry and how to better involved the media as a stakeholder especially when having to report on issues that have an impact on the country’s image. 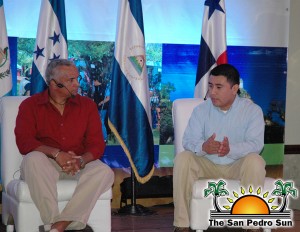 The participants of the workshop came from a wide-cross section of communicators such as internationally known travel writers; well-known bloggers; international, national and local media personalities. A delegation of five from Belize was invited to attend the conference where they shared ideas and even participated in a debate as to how the world perceives tourism in Belize and how the media in Belize perceives tourism. During one of the debates, the communicators agreed that there needs to be more ongoing dialogue between communicators, specifically the media, bloggers, travel writers and the tourism stakeholders, especially in time of crisis. “When there is crisis in a situation affecting the image of the country, the media and journalists hate to be kept in the dark. We need to be fed with information in a timely manner, but at the same time tell [the media] what is being done to immediately address the situation,” interjected one of the local journalists on the panel who was responding to comments from the tourism stakeholders that “sexy and sensational news” always takes precedent. “Unfortunately sexy news sells and that is what many people want to read about, but as the media, we have a responsibility to be careful with the information we put out there, especially when the sensational items are involved,” said Mildrid Espinoza of South –South News. What makes it a challenge for the tourism stakeholders is that in many instances, the bad press affects their effort in marketing the country’s tourism product. “We feed from the local press for information. It’s an important source for international press,” said Maria Fernada of Un Nuevo Dia, Telemundo. She indicated that in many instances, the local media is not necessarily given priority, or recognized for their role in shaping the image of a country.

And while they play a critical role in shaping the image of the country, the local media is often kept in the dark when it comes to the positive things being done and the success stories of people who benefit from tourism. “Several times we hear the concern that the media reports only on the bad things, but we want to hear from the tourism stakeholders, and their success stories…we want them to tell us how the lives of people are impacted because of tourism related activities in specific areas…we want the tourism stakeholders to point to us the human interest part of tourism,” said the panelist from Guatemala.

“Crisis management from a communication standpoint is to be perceived as part of the overall risk and crisis management of any organization. Tourism is particularly sensitive to crisis because the tourism activities are really based on perception and it’s a service many people purchase in advance, depending on what you expect from a certain place. So people travel as tourists, as consumers and they are very sensitive to whatever surprising unplanned situation crops; whether the situation is real or not, [tourism organizations] need to quickly respond to the media since they play a vital role in the way the information is disseminated. Tourism is no different from other sectors, however it is more sensitive because it affects individual perceptions; it affects [visitors’] reactions and mood as a potential tourist,” said Risi when interviewed by The San Pedro Sun. 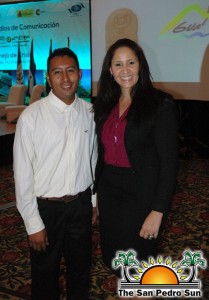 While the media has a critical role in educating and informing a country, Risi says it has an impact on the country’s tourism. “What we see from the perspective of the UNWTO is that the media coverage has an impact on whether the destination can be considered desirable or not. We would never go so far as to draw any sort of line and or tell the media what to write and how to write and when to write. Our responsibility is to transmit the whole story of tourism and it is not only related to numbers, or how people travel from one place to another or how much revenue is being generated. It also has to do with what lies beneath that tip of the iceberg, which is really all the development and the engines that tourism implies. We talk about the infrastructure, investment in general, transport, communication, health, security and the country; tourism is a consequence of all of that. If we are not aware of that whole scope of tourism, we cannot address issues within the industry properly,” added Rici.

“If we want tourism to be truly sustainable, the host community – the people receiving the tourists – has to become aware of what tourism entails. The media and the people responsible for communications are the link between the intentions and how the people perceive it and it can only be accomplished if when reporting, we tell the whole tourism story. We need to say what that it implies not only the economic impact, but opportunities that lie ahead and the social impact [of said opportunities]. The tourism sector on a whole comes under a certain degree of scrutiny because if we claim that tourism has certain levels of effect, then the tourism stakeholder must always remember that they will be place under some degree of questioning and they MUST be able to respond,” cautioned Rici.

But dealing with crisis is very important for the image of a country especially in the tourism sector as highlighted by Herman Porres, well known in Europe for his contribution in the tourism industry in Spain. “Communication in a crisis situation is crucial, and is import for recovering from a situation. It is not only communicating within an institution. Communication with the media is an important element in managing the crisis situation since tourism is an important product and is very complex and is heavily based on perceptions. It is extremely important for the authorities, to provide the right message, as quickly as possible, to covey the right message even in a very difficult situation,” explained Porres.

And because perception is what drives tourists either to or from a destination, the media must be dear to the heart of the tourism organization. “Communication is not just to tell the truth; it is critical for the media to report on how the situation is being handled and what measures are being put in place to avoid the situation. First and foremost, the media are partners in the tourism industry and they must be treated as such by the tourism institutions. Secondly, the tourism institutions must be transparent with the media, to be very quick and to get all the information at hand and inform them. You must inform them quickly, not only tell them what the real situation is, but what the corrective measures are being taken. Thirdly, the tourism institution must be transparent in saying not only the whole truth but also in encouraging the media to stick to the facts and not to speculate. [However] the institution must also keep their credibility with the media. The media are not the antagonists but are an important partner to deal with the situation,” stressed Porres.

Also a part of the workshop were bloggers and other travel writers as well as social website designers who also shared the importance of their role in communicating and the positive effect they have in disseminating information. The Belize delegation was represented at the conference in Guatemala by Arturo Cantun of Esterio Amor Radio, Dorian Nuñez of Ambergris Today, Jorge Aldana of The San Pedro Sun, Erin de Santiago – a Freelance Travel Writer & Photographer based in Belize, and Miguel Martinez, a Public Relations officer with the Belize Tourism Board.

According to the UNWTO, travel and tourism continues to be one of the world’s largest industries estimated to accounts for about 9% of global GDP or over US$6 trillion and creating 255 million job opportunities. Over the next ten years, this industry is expected to grow by an average of 4% annually, taking it to 10% of global GDP, or some US$10 trillion. By 2022, it is anticipated that it will account for 328 million jobs or 1 in every 10 jobs on the planet.