« Older: Caribbean Villas Hotel to Host the Biggest LGBT Pride Event in Belize History
Newer: » Launch: Discover How To Be A Belizean Traveller


Caribbean Villas Hotel in San Pedro is gearing up to host the first Lesbian, Gay, Bisexual, and Transgender (LGBT) Pride Week from September 5th to the 12th. The event, which will be the first of its kind in Belize’s history has been dubbed as the largest ever and has been tagged with the name “Temptation Island Pride Week.” However, the news about the event has already attracted concern from critics, and has brought about debates on social media and even on the local airwaves. 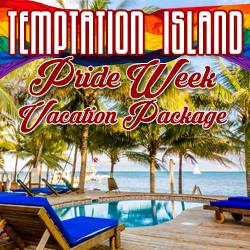 The highlights of the pride week event will include exclusive nightly activities such as: drag shows, a toga party, leather and lace party, a masquerade ball, a runway modeling show among other activities. The hotel has set aside all its 61 rooms to accommodate to accommodate the event attendees.
According to the proprietor of Caribbean Villas, Peter Lawrence, there is one main controversy against the event. Pastor Scott Stirm, vice president of Evangelical Association considers the organization of the event a terrible thing for the country. “Pastor Stirm has condemned the event, saying that it is another reason to promote the homosexual agenda. I have offered to meet with him, but he refuses my request,” said Lawrence.
In view of the allegations about a protest being organized by the church on the same week of the event, Lawrence does not anticipate any form of disturbances, since he claims to have support from the Minister of Tourism, Culture, and Civil Aviation, Honorable Manuel Heredia Jr. “It seems very unlikely for a protest to happen after having a talk with Honorable Manuel Heredia and the police. Both of them have to approve permits for a protest and, looking at the current situation, I don’t see those permits being issued,” said Lawrence. He went on to note that the Honorable Heredia realized that there is a huge segment of tourism been missed in Belize, and given the fact that tourism has declined slightly this year, the LGBT market can be that boost the island needs to remain as Belize’s tourism mecca.
Lawrence also claims that there is support from the Cabinet for both the hotel and the event. “There has not been one vote against the event at Cabinet and the Minister of Immigration has been informed that everybody entering the borders of Belize must be treated the same way as everybody else. The Minister and the government thinks it is a wonderful idea; we are not breaking any laws, and everybody has the right to come to the country and be treated in the same fashion as everybody else,” stated Lawrence. Belize Press Coordinator, Douglas Hyde also reiterated that there is nothing illegal about the event. He stated, “Sodomy is still illegal under Section 53 of the Criminal Code, but police cannot take any action against the event that is being held on a private property. Unless a crime is reported, police cannot intervene.” Hyde stated that measures of caution will be taken to ensure the safety of both the event’s participants and the community.

Lawrence added that the reason he is holding such an event is to bring more tourism to the island and compete with other countries that are encouraging LGBT tourism like Cuba and Mexico. This new tourism venture is expected to raise the tourist arrivals in the country by as much as 20% in the next year. “We’ve always wanted to tap into the LGBT market, because it is a tremendous boost for the economy. Tourism will eventually level out, unless we look at different markets. Other countries have embraced the LGBT, and they are reaping the benefits. We need to get into that market too,” said Lawrence.
For more information about the event or how to book a vacation package, contact Caribbean Villas Hotel at 1-800-213-8347 or 226-2715 or [email protected] There is also information available online at www.caribbeanvillashotel.com/temptation-island-vacation-package and on facebook at: www.facebook.com/temptationislandprideweek