The fifth issue of the much-celebrated Flavors of Belize magazine was launched on Thursday, July 23rd in Belize City. Media, stakeholders, friends and family were all invited to the Rainforest Room at the Best Western Biltmore Plaza to witness the grand unveiling of the newest edition of the magazine.
Leading the ceremonies was Clive Myers, who welcomed the attendees to the highly anticipated unveiling. Singing the national anthem was Jackie Castillo, accompanied by Garifuna drumming. Emaun Hyde, Managing Editor of McNab publishing Ltd, gave the opening remarks. Hyde spoke of the growth in the culinary industry of Belize, highlighting the energy and creativity of Belize’s chefs with each passing year. 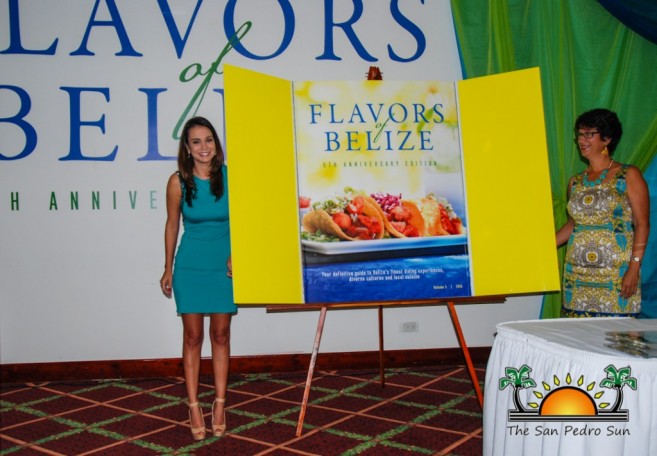 Karen Bevans, Director of the Belize Tourism Board also spoke of the work that Flavors of Belize has done in injecting a new life to the Belizean ‘Rice and Beans’. “We could be hungry, waiting on our food, but now, more than ever, we will always hold back that extra five minutes to make sure we take a picture of our meal when it does come out…posting it on Instagram, Facebook, and other forms of social media,” noted Bevans. She also presented statistics showing how travelers plan their destinations around food, making choices based on the culinary choices available. Fresh, flavorful, healthy, unique…these are traits that stand out and capture the imagination before a visitor has stepped foot in the country. This is the market that Flavors of Belize has been tapping into for the country.

Chefs have had to step up to the plate indeed, especially working hard on presentation. Flavor has always been there, it is what Belize is known for, but now, a pretty plate is as important to the dining experience as the taste. Osmany Salas, President of the Belize Tourism Industry Association, commented just that. As the owner of Nahil Mayab restaurant in Orange Walk, Salas is acutely aware of the need to improve in both taste and presentation. He credited Flavors of Belize for catapulting the culinary delights of Belize to the international market, and for encouraging talented local cooks/chefs to step out of the box and create beautiful dishes that match the taste they are aiming for.

Tanya McNab, Creative Director of McNab Publishing Ltd and the creative entrepreneur behind Flavors of Belize was delighted to thank everyone who took a chance on her fledgling company’s bright new idea in 2010. She spoke of the leaps and bounds that Belizean cuisine has taken since, proud of the impact that Flavors has had on this phenomenon. She praised the hard-working chefs and businesses that have contributed to this growth, taking the time to honor those partners who have been a part of the phenomenon in the five years since Flavors of Belize launched. Honorees included: The Belize Biltmore Plaza, Belize Tourism Board, The Beverage Division at Karl H. Menzies, Bowen and Bowen Ltd., Blue Water Grill, Chef Sean Kuylen, Chef Robert Pronk, Elvi’s Kitchen, The Hidden Treasure Restaurant, Las Terrazas Resort and Residences, Maya Beach Hotel and Bistro, Olivera Rusu Photography, Pineapples at Ramon’s Village Resort, Premium Wines and Spirits, Red Ginger Restaurant, Tipsy Tuna Sports Bar, Victoria House, Vista Real Estate and Wine de Vine.

After the ceremonies were over, Tanya and her mother unveiled the beautiful front cover of the 2015 Flavors of Belize to much applause. Everyone was then invited to indulge in some of the celebrated Belizean food, created by top chef Sean Kuylen and washed down with Belikin’s bright beer. It was a tasty, wonderful affair celebrating the best of Belize: its food! Congratulations Flavors of Belize!
McNab Designs prints 10,000 copies of the magazine annually, and distributes them countrywide to resorts and lobbies, as well as provides copies to BTB, BTIA and BELTRAIDE for their international travel shows. The magazine is available in its entirety online for perusal as well.