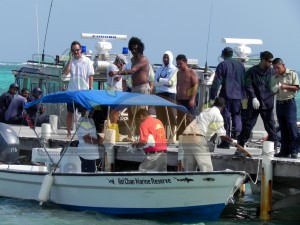 Investigations are ongoing into the deaths of one male and one female tourist which occurred in the Hol Chan Marine Reserve (HCMR) located between Caye Caulker and San Pedro, Ambergris Caye. The incident occurred shortly before 1PM on Tuesday, April 3rd during a snorkeling trip. The tourists have been identified as American national 54 year old Roger Burger and Italian national Zyihe Florencia. Both were part of a group of seven that were separated from their group by strong currents near the channel at the HCMR. According to police the group left Caye Caulker on board a vessel, namely Cyclone, belonging to Tsunami Tours based in Caye Caulker, for a morning excursion to Hol Chan and Shark Ray Alley.

Miguel Alamilla, manager at Hol Chan Marine Reserve, who was at Shark Ray Alley at the time spoke with The San Pedro Sun and recapped his experience.

“I received a call from the rangers that an incident had been reported. The report was that four individuals (in fact it was seven) went missing during a snorkeling tour in the Hol Chan area. So we responded to that. Once at the site we discovered that three of the snorkelers had made it back to the boat while the boat captain/tour guide had remained to search for the four that had drifted. We managed to pick up the guide, Marcel Graniel who was close to the reef crest. This was after 12pm. I think this incident happened around 11:45am. He told us that there were four people stranded. We were trying to locate the people. Several hundred meters south of where we picked up the tour guide, we spotted two individuals.  By the time we got to them, the waves had pushed the gentleman inside the reef. There was a lady still outside the reef in a very panicked state. I took the man’s snorkel gear and I jumped in, swam out and brought her in. She was in an extreme panicked state. When we pulled them in, the man and the lady, they told us that the others were dead. The gentleman, he had his wife’s wedding ring on his hand. We put them in another patrol boat and we sent them to the PolyClinic. There were two still missing. We decided to send all five to the PolyClinic to receive medical attention.”

Alamilla informed that the HCMR personnel continued their search and around 1PM a Caye Caulker vessel spotted the first body floating along the inside of the reef between Hol Chan and Shark Ray Alley. Almost an hour later, at about 2PM, HCMR personnel found the second body floating close to the reef in the same vicinity where the first was found.

According to Dr. Noeli Nicholson, around 12:40PM, the five tourists arrived at the Dr. Otto Rodriguez San Pedro PolyClinic II accompanied by a Hol Chan Marine Ranger. They appeared to have received multiple abrasions and were very shaken up. It is understood that they mentioned to authorities that their tour guide kept taking them into the channel at Hol Chan and they started to get separated because of the strength of the waves that were pushing them into the reef. The husband recollected that he and his wife became separated from the group around 11:30AM.

The bodies were transported to the Dr. Otto Rodriguez San Pedro Poly Clinic II where they were officially declared dead on arrival. The bodies were identified by family members who were at the clinic.

The boat captain, Marcel Graniel was detained for questioning at the San Pedro Police Station and the vessel was impounded pending the outcome of an investigation. The bodies of Burger and Florencia were transported to KHMH for a post mortem examination.

It has been confirmed that none of the snorkelers were wearing life vests and it is not clear if the guide was towing a life ring, which is a common practice with many snorkel guides. Although guides can offer life vests to their guests before getting into the water, it is only required by law that the boats have adequate vests on board and snorkelers are not mandated to wear them. It has also been determined that at the time water conditions in the area were quite turbulent.

The tragic incident also raises questions as to what exactly are the rules and regulations regarding boat captains and tour guides operating at sea. To better understand these regulations The San Pedro Sun contacted many reputable tour operators in San Pedro as well as HCMR manager Miguel Alamilla. It was confirmed that regulations stipulate that there is a ratio of one guide per every eight tourists providing that they are doing the same aquatic activity. However at no time is it required that a person remain on board the vessel while it is anchored, such as the case at HCMR.

The San Pedro Sun is deeply saddened by this tragic news and we extend heartfelt condolences to the families and friends who mourn the loss of their loved ones.