Three people safely survived an emergency landing that occurred on the afternoon of Tuesday, June 2nd. The Tropic Air Cessna 182 destined to Roatan, Honduras experienced malfunctions shortly after departure from the Philip Goldson International Airport (PGIA) resulting in an emergency landing approximately one mile south of Half Moon Caye in Lighthouse Reef Atoll. In the aircraft was the pilot and two passengers, who were quickly rescued by the Belize Coast Guard. 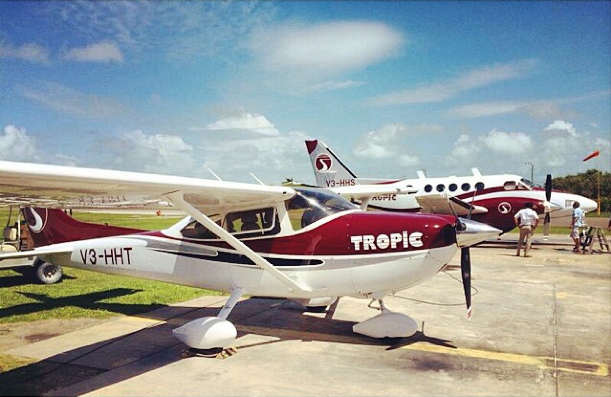 According to initial report, the flight departed around 4:30PM being piloted by Denfield Borland with passengers American National Arthur Rogiers and Honduran National Eddie Bodden on board. At around 5:17PM, the control tower at the PGIA received a distress call stating that the single engine aircraft was experiencing difficulties and would not be able to reach its destination. Borland communicated that he would attempt an emergency landing at the airstrip in Half Moon Caye.
The senior pilot was unable to make it to Half Moon Caye, but managed to make an emergency landing in a shallow area near the island. Belize Coast Guard officials and Belize Audubon Society Rangers stationed in the area were quickly deployed to the area, and shortly after, they rescued the pilot and passengers who had swam three miles under inclement weather condition in a raft. They were transported to Blackbird Caye until all logistics were sorted.
On Wednesday, June 3rd Tropic Air released an official statement on the incident indicating “On Tuesday evening at approximately 5PM, our Cessna 182, V3-HHT flying en route to Roatan, experienced an engine malfunction. The pilot was forced to make an emergency landing at Lighthouse Reef. Two passengers and the pilot were picked up by the Belize Coast Guard. They reported no injuries and are awaiting better weather conditions to be transferred back to Belize City. We will issue a formal press release once all the facts of the incident are fully known.”
The Belize Department of Civil Aviation and Tropic Air has launched a full investigation to determine the reason for the engine failure. Damage costs are not yet known.