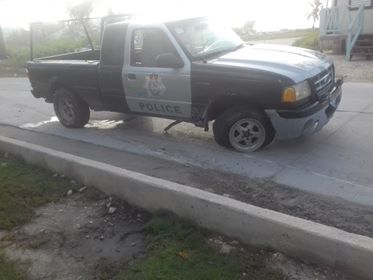 Images and footage of what appears to be a damaged police truck north of San Pedro Town have been circulating on social media. The photos show the police vehicle on the side of the road with a damaged front wheel caused by the impact allegedly made when it hit a light post. According to witnesses at the scene, the incident happened early on the morning of Friday, June 26th, and one of the officers, in uniform, appears to be under the influence of alcohol.

Witnesses added that they smelled liquor (stout) when the officer was questioning about the video recording. One of them could be heard in the video saying that police threatened him if the video was posted on Facebook. Despite this warning, the video ended up in social media.

The Officer in Charge of the Coastal Executive Unit (Ambergris Caye and Caye Caulker) Superintendent Christopher Noble was approached about this incident but offered no comments. The footage was forwarded to the Commissioner of Police Chester Williams, who is yet to weigh in on this matter.