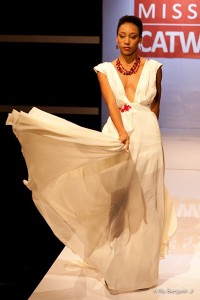 Stirm and 14 other designers were challenged by host and executive-producer Keenea Linton-George to “create an outfit that reflects the style and culture” of their individual countries joined by “the common thread of independence.” The designers who hail from Barbados, Guyana, Jamaica and Trinidad were challenged to work within a short time frame and with a US$20 budget.

Rebecca, 18, used Belize Hispanic and Mayan culture as inspiration for her design worn by model Abenah Gonzalez. “We are nestled in between two Hispanic-speaking countries so unlike the rest of the English –speaking Caribbean we have a lot of Hispanic influence. So I chose the cut of my dress from kind of that quince anos bigger skirt (full skirt) small bodice and then chose to do the embroidery based on more of the Mayan culture. I really wanted my piece to have a lot of oomph out on the runway so I wanted a lot of material, so I actually looked in the curtain section for material. I was able to get a lot of this very, very light; airy fabric for a little bit of money since we were on a tight budget. I added embroidery to give it some detail and intricacy.”

Rebecca was the first of the show’s designers to win a challenge as no winner was declared in the first episode where five contestants went home. 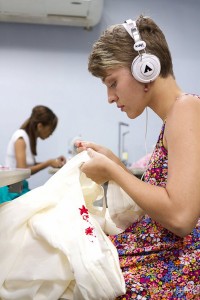 She describes her win as exciting, “I was really, really excited to be the first to win something, that’s really huge and I got so excited that when I went to leave the stage I tripped on my model’s dress and kinda fell on her. It was really funny. I was over excited definitely!
Rebeca, who calls her fashion label Fancy Purple Paint says she has enjoyed the intense experience of the reality show. “The experience so far I’ve had to learn how to definitely think on my feet very quickly. Like we get a challenge and we have to execute it all in a very short period of time, so I’ve had to choose fabric quickly sketch quickly, sew quickly everything has been fast I’ve really enjoyed meeting the people, the internationals and the Jamaicans, it’s been great connecting and getting to know everyone. I really like Jamaica so far it’s very similar to Belize actually it’s kinda like being at home but just different people”

Rebecca and the remaining 13 contestants are vying for JA$3 million in prizes including the chance to show at London Fashion Week. Mission Catwalk airs on televisionjamaica.com Tuesdays at 7:30 pm Belize time and repeats at 4:30 PM on Thursdays.

Mission Catwalk is a fashion reality series created by Jamaican fashion designer Keneea Linton-George aimed at discovering and developing new talent. The Kingston-based show tests the creativity and skill of each contestant through various challenges. On each episode, a guest judge joins Linton-George (who also serves as host and executive producer), menswear designer Carlton Brown and Jamaica Observer Lifestyle Editor Novia MacDonald-Whyte to critique the designs and eliminate one designer. Mission Catwalk is directed and edited by Mykal Cushnie. Title sponsors are Supreme Ventures Limited (SVL), National Commercial Bank of Jamaica (NCB) and Digicel. The show airs Tuesdays at 8:30PM on Television Jamaica.