Karen Waldrup, singer/songwriter and artist based in Nashville Tennessee, USA is in San Pedro Town and is scheduled to perform at Wet Willy’s in a benefit concert for the Mama Vilma Family Home. The event is planned for Thursday September 27th and should start at 6PM with an official meet and greet, after which the show is scheduled to begin at 7PM. 27-year-old Waldrup, of Bravo Network’s Platinum Hit fame, will be using her beautiful and melodious voice to raise funds for a worthy cause while she vacations in Belize. 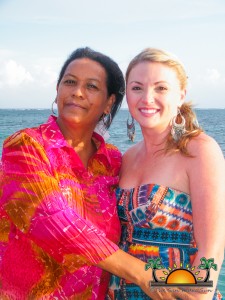 Mrs. Shelley Huber and Karen on the dock at Wet Willy’s. Huber is a director of the Mama Vilma Family Home, which will be the beneficiaries of the concert.

Waldrup touched down at the Phillip SW Goldson International Airport shortly after 3PM on Wednesday September 26 after her flight out of Texas, USA. She then flew to San Pedro Town, Ambergris Caye. Speaking to The San Pedro Sun, the enthusiastic young artist said that she is looking forward to meeting many people at the benefit function and invited everyone to come by for a good time. “The people of Ambergris Caye can expect to hear some country sets, and I am hoping to fuse some of the local musicians as well. What people can expect is a good time, and the monies raised will go towards a good cause. We will have some good original music coming from Nashville, which is a song writing community. I will be performing songs that people can connect to,” said an excited Waldrup.

She is also planning on performing a few cover songs, which she hopes people will request for a small donation towards the Mama Vilma’s Family Home. The songwriter has four albums, the latest being “The Beginning,” which Waldrop says will be performed on the night of the show. “The record ‘The Beginning’, released in May, is about life’s journey. The title song is basically saying that it does really matter where you are in your life, you can decide that today is the beginning, no matter where you are in life,” said Waldrup. The Beginning can be an inspiration to those who may be suffering abuse – leave the old life and begin a new one, which is most apropos considering the beneficiary of the funds that will be raised at the event: the Mama Vilma Family Home.

Karen Waldrup received a vocal scholarship to the University of Southern Mississippi and landed a coveted spot opening for Rodney Atkins in 2009. She was also named “Top 25 Songwriter” by Great American Country in 2008. The sweet voice of the country singer will be the main attraction and the entire public can attend the show. Admission to the event is $15.