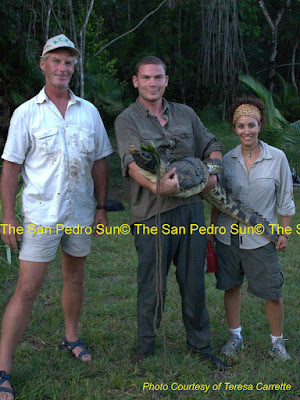 Belize has been in the spotlight in many international and well viewed programs. On Tuesday, January 19th, Belize was once again featured on The Animal Planet. As part of his ten episode animal adventure, South African Donald Schultz filmed his third episode of his Wild Recon show in two main areas of the country.

In Belize, Schultz set out on a dramatic search for deadly animals like crocodiles, howler monkeys, hawksbill turtles, sharks and rays, boa constrictors, rattle snakes and even tarantulas. In some instances blood or venom samples were retrieved from the animals. Schultz main purpose was to collect blood and tissue samples needed for research before these endangered animals disappear. Some of the animals were fitted with tracking devices which will alert Schultz headquarters in the case of poaching.

First Schultz headed into the dense rain forest canopy to track down one of the loudest animals in the world, the howler monkey which he described as “a critically endangered primate that is falling prey to poachers.” While in the deep forest of Toledo, Schultz stumbled upon a tarantula spider which was almost as big his hand. He proceeded to anesthetize the spider and with a tiny electric shocking device, Schultz managed to draw the spider’s rare and understudied venom. While Schultz came across and attempted to extract venom from a rattle snake, he was not as lucky it proved to be dry of venom.

His trip to Belize also took Schultz to Belize’s Barrier Reef. Along with his team, Schultz collected blood and tissue from nurse sharks, rays and even a juvenile hawksbill turtle (he was fitted with a tracking device). After days of several attempts, he finally got the opportunity to capture an American Crocodile. While in southern Belize, Schultz and his production team were hosted by the American Crocodile Education Sanctuary (ACES) in the Toledo District.

In an exclusive interview with The San Pedro Sun, ACES Founder and Crocodile Behaviorist Vince Rose explained that he was extremely pleased with the episode. “While the episode was not about ACES, I am happy that ACES got the exposure to help educate the world about American crocodiles and for that we are extremely pleased,” explained Rose. He added that, “a source of education is television through educational program such as Animal Planet. Donald Schultz’s Wild Recon episode definitely educated millions of people in the world about endangered animals and at the same time giving Belize a positive exposure.”

The episode was filmed in late July and early August mainly along Belize’s Barrier Reef and in the Toledo District. Rose concluded that Schultz expressed that not only was he satisfied and pleased about Belize, but is considering returning in the future.

Samples taken have been studied: the monkey turned out to be disease free, the shark and ray samples are now part of a global database that will be used to enforce anti-poaching laws, the spider turned out to be Citharacanthus meermani a newly described species of tarantula spiders and its venom is being analyzed by a Swiss pharmaceutical laboratory, while the croc remains safe at ACES and is being used for educational purposes. 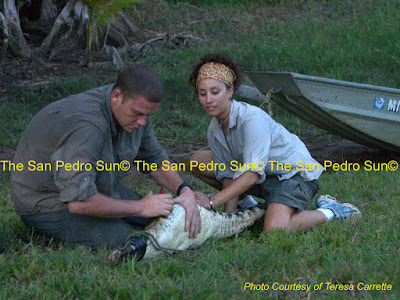