Home » Conservation » Letter to the Editor: Understanding the Crocodile

Letter to the Editor: Understanding the Crocodile

It’s been three years since I was last in Belize, but part of me felt like I never left. Maybe it’s because I am just continuing what I started- investigating how human pollution and disturbances are affecting parasites and disease in the crocodiles of Belize. Many people ask, “Why do you care about what happens to crocodiles?” If you REALLY understand about how the environment works, you know that crocodiles are on top of the food chain where they live, they are like the lions of the jungle, the king. And if something bad happens to them, it will be a negative domino effect on the rest of the 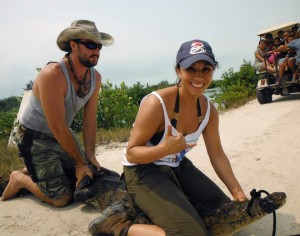 environment, even effecting humans. Anytime there has been mass populations of crocodilians dying, or being killed senselessly, it always comes back and bites people in the butt, either through food (because the fish disappear), or through economy (because many communities use crocodilians as a way of ecotourism, some African villages have become VERY successful and economically stable based on this).

So I came back to Ambergris to take science samples of the crocodiles on the island to see how healthy they are. And if you think about it, if they are not healthy, what does that say about the health of the people on the island? Both crocodiles and people are eating the same food (shrimp, crab, fish) and drinking the same water. So depending on what my samples say, they will have a great impact on how the people of Ambergris should react to how they are treating their homes, environment, and the crocodiles. I always found it was interesting that the ancestors of the Mayas, the Olmecs and Toltecs, praised crocodiles, respected them. Actually, according to them we all were made from a crocodile being in the sky- we all have crocodile blood in us! And there are various human populations around the world that to this day still love and respect the crocodile- killing one is seen as a bad omen and a disrespect for nature and the community, as they understand the negative effects their livelihood will have if the crocodiles disappear.

So I’m hoping with my research, and with the assistance of American Crocodile Education Sanctuary (ACES), I can help restore that respect and understanding for the crocodile. If people thousands of years ago understood the importance of crocodiles, I would think our modern society would as well.