Caye Caulker Village held last night an open forum where community members had the opportunity to meet and talk with the five candidates vying for the post of Chairman of the village. 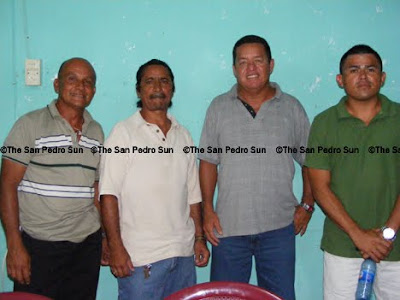 It was a good turnout as members eagerly awaited for the commencement of the forum. The candidates are Alberto Villanueva, Marcial Alamina III, Robert Blease, Bartolo Rodriguez, and Emmanuel Rodriguez.

After a brief introduction by all candidates, members of the island were invited to ask questions. It is interesting to note that all five candidates have held positions within the Village Council in the past including the Chairmanship. Concerns were many but among the more heated one was the question of land sale in Caye Caulker. Land had been previously reserved for park/recreational purposes on the North side of the island and people were concerned that it had been removed from Belizean hands and was now in privately owned. Present Chairman Ralph Hulse was on hand to answer the very controversial question. He stated that to his knowledge the land was divided into three lots and sold to an individual from Belize City. During the meeting, this topic kept being raised and candidates were poignant in saying that once elected, they would conduct proper investigations into the matter in an effort to find out if the land can be returned.

Another topic was the issue of the main palapa where families conduct business either by selling crafts or delicious home made food. According to villagers, at the council is a plan for the palapa and there main concern was that it would be broken down. Candidates stated that what they intended to do was re-furbish the palapa and while that would be taking place, members would be temporarily moved to a new location.

Of much discussion was the area known as Bahia Puesta del Sol, a subdivision that is much neglected and of much concern to residents who live there. With the advent of the Hurricane Season, residents expect much water to rise into the subdivision. “Our children have to walk through the water for them to go to school, making them very sick,” commented a father. Poor streets in the area were not their only concern and brought up at the meeting was the fact that the subdivision does not possess an entry or exit point. The access road to enter the subdivision is private property and residents wanted to know what would happen. Candidates stated that they would look into purchasing the private property or at the very least continue dialoging with its owners to find out the best possible solution.

Elections will be taking place on Sunday and Caye Caulker has an estimated 800 registered voter population.

Letter to the Editor: San Pedro Lobster Fest says thanks