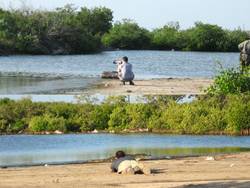 A professional photographer from Thousand Oaks, California, USA, Brandon lives to photograph and conserve wildlife. His greatest passion is to capture wildlife in every remote region of the globe in their natural habitat. To date, Brandon has travelled to and captured wild animals in the Pantanal of Brazil, Kakadu National Park and surroundings of northern Australia, Osa Peninsula and Carcovado National Park in Costa Rica and many other areas in California. 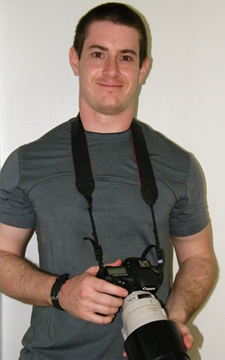 Brandon’s visit was first scheduled for late 2010, but with the unfortunate loss of the American Crocodile Education Sanctuary (ACES) facility in southern Belize, his visit was postponed until now. Brandon will be in the country for a total of eight days, from January 4th through January 12th. Sideleau will be working in San Pedro primarily, then travelling south to Punta Gorda with ACES Animal Behaviorist Vince Rose to film some footage in the area where ACES was once located.

Internationally, Belize is known to be one of the last strongholds of American Crocodiles and according to Sideleau, their occurrence is reported to be in much higher numbers than they actually are. Cherie Chenot-Rose and Vince Rose of ACES have been working with the American and Morelet’s Crocodiles in Belize for several years now. While in Belize, Sideleau will be working with the Roses on American Crocodile conservation, studying the population sizes, photographing the crocodiles and monitoring their statuses on the island. Apart from photographing these endangered species, Sideleau is also doing journalistic work for world-renowned crocodile specialist, Dr. Adam Britton of www.crocodilian.com out of Darwin Australia.

Sideleau pointed out to The San Pedro Sun that the loss of mangrove habitat, development, hunting and outright killing have caused much impact on the population of the crocodiles that are presently here on the island, and much needs to be done to protect these crocs if we are to maintain the species.

Sideleau hopes to use his website’s podcasts and photographs to bring international attention to the situation of the American Crocodiles here in the country and strike more interest in their conservation.