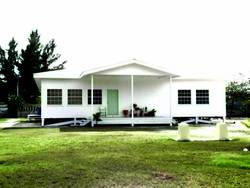 The American Global University School of Medicine (AGUSM) was chartered by the Government of Belize to legally conduct business in the country back in 2006. AGUSM is one of just two medical schools in Belize. But after five years of operation from their Belmopan City campus, the school has opted to move to San Pedro, Ambergris Caye. It’s not the first time that a medical school has been on the island, but the move by AGUSM comes at a time when all other existing medical schools on Ambergris Caye have packed up and left.

AGUSM opened the doors with its first class in 2006 and according to the AGUSUM administration, it is designed with a US medical school based curriculum. Half of the medical program is conducted in Belize and the other half, the clinical rotation, is completed in hospitals in the United States of America (USA), and the United Kingdom (UK). About 90 percent of the enrolment at the medical school consists of foreigners and the other 10 percent are students from Belize. Although the clinical part of the medical program and the graduation is held abroad, the degree is issued from Belize. On average the university admits between 20 and 25 students per semester, with three semesters per school year. AGUSM has two programs, a six-year Pre-Med program for high school graduates and a four-year Medical Degree Program for Bachelor’s Degree graduates.

But why has AGUSM relocated to Ambergris Caye? In speaking to The San Pedro Sun, AGUSM President and Chief Executive Officer Dr. Malik Soudah said that it’s all about becoming more competitive with other Caribbean based universities. According to Soudah, while the school was previously in mainland Belize, it was far from the setting that other Caribbean based medical universities offer, which usually includes an idyllic beach setting. In addition, Soudah said that San Pedro has a lively recreational lifestyle, ideal for their foreign students. The university officials also took into consideration the fact that San Pedro is a small knitted community, with most of the service and settings synonymous to other Caribbean based universities. The relocation of the medical university coincides with the school’s first recruits completing their clinical years abroad.

But while the school is settling down in their new campus on Ambergris Caye, the Ministry of Education is saying that AGUSM has violated their charter agreement. According to the Public Relations Officer in the Ministry of Education, Arlette Gomez, the Education Department was never informed that the medical school was relocating. Under the Charter agreement, Gomez says, that one of the things clearly specified is the school’s address which is important for the Education Department to carry out their supervision and inspections. However, the AGUSM Administrator in Belize Candace Castillo explained that the CEO in the Ministry of Education David Leacock was informed via a letter, something Gomez disputes. Gomez indicated that a team from the Ministry will be investigating the issue, which they became aware of when contacted by the media. Depending on the outcome of their investigations, the Education Department will be taking disciplinary actions which can lead to cancellation of the school’s Charter agreement.
AGUSM letter of move to SP. 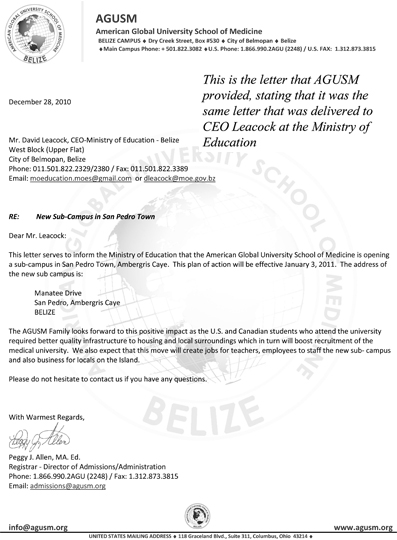 The relocation of the institution is just one of the many issues that are plaguing the school’s reputation. An individual claiming to be from AGUSM’s competition in Belize hand delivered a package with several documents to The San Pedro Sun as well as other media houses throughout the country, which alleges that AGUSM is selling transcripts and is also implicated in several litigations in the US courts. These are very serious accusations, but for Dr. Soudah, the allegations are all part of a campaign to slander the school’s reputation.

When The Sun questioned Dr. Soudah about the allegations that AGUSM is milling transcripts and medical certifications to students, Dr. Soudah denied it. He said that, “I know where you are coming from and I can explain where the information came from. Sadly the information you got is coming from the Central American Health Sciences University (CAHSU) in Belize.” Dr. Soudah made reference to a fake student who allegedly transferred from CAHSU and registered at AGUSM. According to AGUSM, the student was accepted without a transcript on a provisional basis and an unofficial transcript was produced and attached to his file, with the understanding that within a four week period, he must provide the school with an official transcript from CAHSU. AGUSM representatives said that the fake student gave a deposit after being accepted to the school with his particulars, all false, but never did attend classes. A letter granted to The Sun indicated that after the four weeks period was up and the student failed to show up to classes, a dismissal letter from the school was issued, mailed to the fake address, and a copy placed in the student’s file. While asked if it is a normal procedure to accept students before providing an official transcript, Dr. Soudah explained that exceptions are made to accommodate students, but students must stick to the four-week provisional deadline set by AGUSM. Dr. Soudah assured The Sun that AGUSM has never allowed any student to proceed with their classes without a transcript.
Dismissal letter 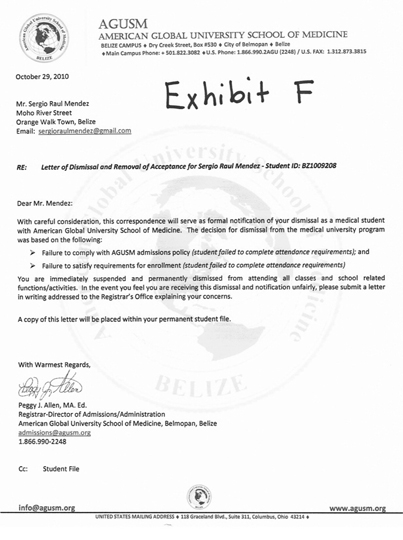 Dr. Soudah also responded to questions raised about ongoing court cases involving AGUSM. While he would not go into specifics, he said that like any other business, AGUSM also has dissatisfied “customers”, referring to students, and they reserve all rights to take AGUSM to court if they so desire. Dr. Soudah went on to explain that “we have an ex-partner that we are settling issues with,” making reference to Radoslaw Lewkowski who allegedly has been fraudulently collecting tuition on behalf of the school via an electronic personal/business merchant bank account with Chase Bank from the students’ credit cards. AGUSM claims that while they are unable to clearly state how much money Lewkowski has made off with, they estimate that it surpasses $100,000.00 US. In a letter written by AGUSM’s lawyer, namely Graff & Associates, LPA Councilors and Attorneys at Law in Columbus, Ohio, US to Chase Bank, they outline the fraudulent actions committed by Lewkowski and how he managed to highjack the medical institution’s website and banking information. The letter, copied to the Columbus Police Consumer Fraud Department and the Attorney General of Illinios, US is asking Chase Bank to investigate the matter in an “expedient manner,” since students are contacting their own credit card issuing companies and bank about the fraudulent collection of payments via their credit cards (Exhibits H & I).

In clearing the AGUSM reputation, Dr. Soudah stated that

“we have always been doing the right thing since day one in Belize. We have kept a good academic program in Belize with a good medical education and one of best clinical rotations with over 16 hospitals available for our students. I want any medical school in Belize to match that with written contracts. We are not here to do hocus pocus or any Mickey Mouse medical school, we are a legitimate business. Anyone who thinks they have any information against us, then show us. I challenge anyone with that information. We are very professional…if I am guilty then show me the proof.”

Of note is that during our investigations, signatures in documents provided in the package given to the media were significantly different from documents on the AGUSM website (www.agusm.org). In addition, there were several discrepancies on the Internet regarding medical universities bearing the same name but operating from South America and the Caribbean. AGUSM officials in Belize maintained that they are not affiliated with any other institution bearing similar names. AGUSM hopes to start classes on their new campus, formerly Ambergris Caye Elementary School (ACES) on Monday, January 17th. Some of San Pedro’s medical professionals have been recruited to teach at AGUSM.