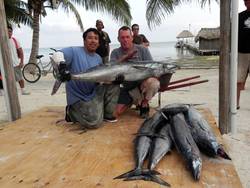 The annual Wahoo Challenge took place on Saturday, January 22nd at the Captain Morgan’s Retreat. With promising weather, anglers took to sea bright and early for a day of serious fishing.

“Fu Di Road” was the first boat to return around 4:15pm and the weigh-in started at about 4:30pm. With 14 boats competing; 12 from San Pedro, one from Belize City and one from Orange Walk, the tournament promised to be a competitive one. 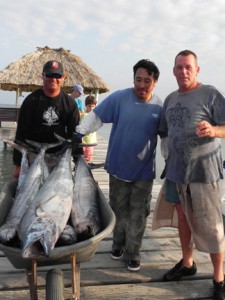 At the award ceremonies, first place went to the boat “Fu Di Road” with Captain Aldo Urbina of Orange Walk. With Wahoos weighing in at a combined weight of 118lbs, “Fu Di Road” took home a $3,000 cash prize as well as a trophy. The second place went to Charlie Reed of “Catch of the Day”, which took home $1,500 with their top two Wahoos weighing in at a combined weight of 88lbs. The largest Wahoo was reeled in by Aldo Urbina and weighed in at 68lbs for which he received a $1,000 cash prize. Top Female Angler, Stephanie Ferran and Top Junior Angler, Leonard Logan were onboard “As U Wish” with each winner reeling in Wahoos weighing 38lbs each. They both received a $250 cash prize and trophies.

Organizers of this year’s Wahoo Challenge take this opportunity to give special thanks to Captain Morgan’s Retreat and Wayne the weigh master for their invaluable assistance in making this challenge a huge success.

Letter to the Editor: Thanks to the Ministry of Education