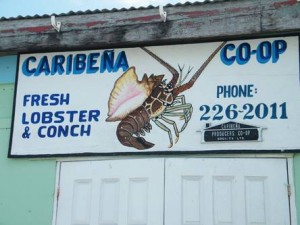 The San Pedro (CPCL) was established in 1963. The main products offered by CPCL were Lobster, Conch, Whole and Filleted Fish and Shrimp. The Co-operative unexpectedly closed its doors on February 28, 2010 with no notice or explanation before or after closing. With the apparent decline of fresh seafood available on the island, The San Pedro Sun contacted Mr. George Kumul; then manager for the CPCL at the time of its closing to get some insight as to what transpired.

Before getting to the point as to why the Co-op closed down, we learned a bit more about the benefits of having a Co-op on the island and a little bit of Mr. Kumul’s history with the business. Mr. Kumul informed us that he started working with the Co-operative in 1971, a mere eight years after the CPCL was formed.

CPCL brought with it many benefits to the fishermen and members on the island. First and foremost, it alleviated the need to travel to the city for trade of products. This was major as it took fishermen anywhere from six to twelve hours to get to the city in those times. The Co-op also functioned as a means of providing financial assistance to its members. The Co-op would offer interest-free loans to members for the purpose of purchasing and repairing equipment used in the field as well as for minor repairs to homes and so forth. Payment was also made very affordable by CPCL, as members were able to repay using a percentage of the income from their catch as continuous payment until loans are paid off. CPCL also provided an easier exchange system as fishermen were paid upon receipt of their products.

In July of 2000, CPCL celebrated 37 years of business. That same year, at its Annual General Meeting held on July 16th at the Lions’ Den Mr. Heredia noted, in his Chairman’s report, an increase of 4,018 pounds in lobster production from 1998 – 1999. Out of the total amount (18,310); 16,453 pounds were delivered to National Cooperative and the balance was sold locally. In that same meeting, Mr. Severo Guerrero Jr., then student at St. John’s College/Junior College and a fisherman in his spare time, noted that although that year there was an increase, the overall profile depicted a decline of the industry.

Mr. Kumul informed us that this decline happened rather swiftly, with the onset of the tourism industry. Members of the Co-op saw the new industry as being much more lucrative and as would be expected, members veered towards the increased income, trading in their fishing licenses for tour guide licenses.

In its last year of operation, 2009-2010, the cooperative reported receipt of 500lbs of lobster tails. At Bze$14.00 per pound, that brought in $7,000 for the entire year. This was not sufficient to maintain the operations of the Co-op.

Apart from the daily running of the co-operative, expenses exceeded the profit by far, including outstanding balances on loans from lending institutions, utility bills, delinquent loans by members to the co-op and continued misappropriation of finances all contributed to the unfortunate closing of the Caribeña Co-op.

As for the decision to close, Mr. Kumul told The San Pedro Sun that this decision was made in a meeting held the night of February 28, 2010, where he was not present. The following day upon reporting for work, he was informed that the co-operative was closed and that his services were no longer needed.