No foul play suspected in death of Canadian

A Canadian national was found dead inside his room at a hotel in southern San Pedro Town. The person is 51 year old Jan Peter Sol and was in the country on vacation. While a full post mortem examination is expected to be performed on the body, San Pedro Police does not suspect foul play.

The body was discovered shortly before 10AM today Monday March 26th by one of Sol’s friends. According to SP Police, vacationer Mandy Lee sent her children to check on Sol sometime on Sunday. According to Police, the children reported to Lee that when they knocked on the door, Sol did not respond. Lee told police that she sent her children again on Monday morning but again there was no response. That’s when Lee became concerned and asked another friend living at the same resort, Howard Grosch, to check on Sol. 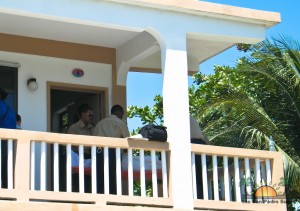 Police said that when Grosch went to check on Sol, he discovered that door was not locked. Grosch then entered the hotel room and discovered the motionless body of Sol, slumped under the table. Sol’s body was observed as semi-clothed, with a gash to the head and a small pool of blood next to him. Police believe that he obtained the gash after Sol either hit the edge of the table or the concrete wall before sliding under the table in a seated position.

Grosch told Police that the last time he saw Sol alive was around 10AM on Sunday March 25th when he was using the pool.

Sol’s body was taken to the Karl Heusner Memorial Hospital morgue for a post mortem examination. Beside the gash, Sol had no other signs of injuries on his body. Having processed the scene and following the initial doctor’s examination, SP Police explained that they have no reason to suspect foul play in Sol’s death.

In speaking to Doctor Laurenzco Nicholson from the Dr. Otto Rodriguez San Pedro Poly-Clinic, he explained that Sol appeared to have died sometime between 9PM and midnight on Sunday. Dr Nicholson further explained that Sol may have died from some unknown previous medical condition which will only be determine following a post mortem examination. That examination is expected to take place on Tuesday March 27th.