San Pedro residents outraged about the crime situation the island 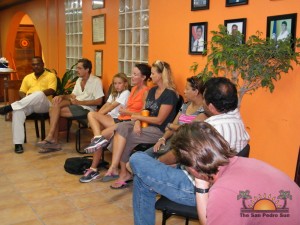 There are growing concerns regarding the crime situation on San Pedro amongst some sectors of the community in San Pedro Town. The concerns stem from a series of home invasions and burglaries that have gone unsolved. Adding to their frustrations is the pace and approach the San Pedro Police Department is taking in trying to solve these crimes, along with complaints that some recovered items have gone missing within the police department. These were some of the sentiments expressed during a meeting which took place on the night of Monday, May 14th at the San Pedro Town Council. In attendance were several members of community who have recently been victims of crime as well as all seven members of the San Pedro Town Council and members of the San Pedro Police Department 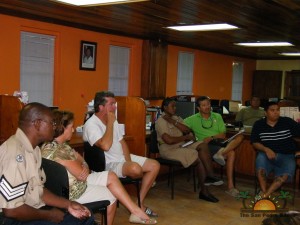 A resident of Northern Ambergris Caye detailed her experience in which she, along with her children, were a victim of a home invasion where they were terrorized and their belongings stolen. While her son was not physically harmed, he remains traumatized and concerned for his safety after he was attacked by the intruders. “Already I have no faith in the system. I am not seeing the police presence in the way they should be,” expressed the very emotional resident who asked to remain anonymous. The child who was present also gave an emotional account of the incident and told the Officer Commanding the San Pedro Police Assistant Superintendent of Police (ASP) Vienie Robinson  that while he can clearly recognize his attacker, “I am afraid that he comes back after me when he gets out of jail.”

Business people who have been the victims of burglaries of late, also expressed their frustration in the way the Police Department is addressing and investigating their cases. “The police know who are committing these crimes, we all know who are committing these crimes, however these people are still out,” said Julian Rivero, a sentiment that was echoed by many others at the meeting. According to the affected business owners and other concerned residents, it appears as is if the police are not giving the issues much attention and it has now become a growing problem that is beginning to “plague” the community. “We simply do not feel safe anymore!” expressed the victims.

The residents also expressed serious concerns about the issue of children being used as part of the crime ring, some of whom are believed to be selling drugs. Serious concerns were also raised about underage children being out late at night and even sold alcohol. The issue of stores opening late till the wee hours of the morning to facilitate the sale of alcohol to the public was also raised. Concerns also centered on the large number of vagabonds and unemployed people harassing tourists for money or offering them drugs, thus contributing to the spike in crime especially during the slow season. 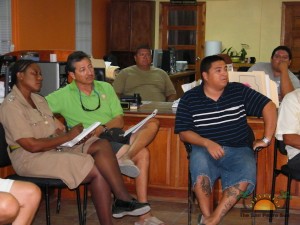 But for ASP Robinson the issue of crime “is real” but equally “real,” is the lack of resources which is clearly “a challenge,” that she is faced with. San Pedro Police has a total of 36 officers to run an island with a population of about 20 thousands. The SP Police Department runs on a three-shift rotation with nine officers per shift. The remaining officers are in charge of ensuring that the day to day operations of the Police Department continues. According to ASP Robinson, within her two months of taking over the SP Department, she has seen the urgent concerns and as such is moving swiftly to get the community engaged. “Already we have trained 27 Special Constables, which we hope will help us to alleviate some of the crime situation,” said ASP Robinson. Speaking on the loss of public confidence, she stated, “Since taking responsibility of this area, I have been working to curb the public perception of the Police Department, but the truth of the matter is that the community simply refuses to be cooperative.” Commenting on the issue of the sale of alcohol up to the wee hours of the morning by certain store owners, ASP Robinson said “it seems that alcohol is the order of the day in San Pedro. I have never seen a community like this in my 25 years of career of service.”  She explained that the community refuses to report those store owners that open late at night because the store owners supply some of the same community members with alcohol late at night.

As for kids being on the street late at night, ASP Robinson explained that already there is dialogue and the proper steps are being taken to propose a curfew for underage children on Ambergris Caye. As for the suggestion to have unemployed people be take off the island, ASP Robinson made it absolutely clear, that as per the constitution, no Belizean can be deprived to move freely within the territory of Belize of which she reminded Ambergris Caye is a part of.

In addressing the issue of “unsolved crime” ASP Robinson explained that the community seems “uncooperative,” with the police during investigations. “We cannot base our investigation on hearsay. We are asking the community who knows about these crimes to come forward and give a statement. We need something to act on and bring these criminals to justice. And if we have the necessary information to investigate your case and you are still not getting the help you need, then you can request to see me. I will ensure that we follow up with your case and that we get to the bottom of it,” assured ASP Robinson. She also promised to personally follow up on the allegations that items recovered as part of the investigation have gone missing from the Police Department. “I heard that such things were happening previous to my post here. I want to assure you that I will not tolerate this from anyone of my officers,” stated ASP Robinson who promised to look into the matter.

What makes it even worse for the SP Police Department is that two of its vehicles are no working making it difficult to conduct mobile patrol as efficient as the Department would want. During the meeting, the SPTC promised to donate a vehicle to the Police Department along with new hand radios that will help them respond to reports in a timelier manner. ASP Robinson strongly encouraged stakeholders to come together and to restart the neighborhood watch groups in the different areas. The meeting ended with a strong commitment from both the Police Department and the SPTCC to work together and to seek an audition with the Minister of Police Hon. John Saldivar to see what can be done to address the issues promptly.