June 29th is celebrated as Dia de San Pedro in honor of the Patron of the island Saint Peter (San Pedro). The fire engine siren sounded at 3AM to wake up island residents, while the church bells at the San Pedro Roman Catholic Church rang at 3:30AM. By 4AM, a mass of thanksgiving started in honor of Saint Peter, considered the Saint of the fishermen.

By the time the Fishermen’s Mass of thanksgiving started, the church was packed with mostly men and there was only standing room. Presiding over the mass was Roman Catholic Priest Arturo Año-Nuevo. Father Año-Nuevo explained that Saint Peter is the champion of fishermen and the 29th of June should be the most important day for the island, an island that was once a striving fishing village and adopted Saint Peter as their Patron.

Following the Fishermen’s Mass, those in attendance were invited to a breakfast at the Lion’s Den for the fishermen. Everyone who attended got a special shirt, a coffee mug and a glass cup as souvenirs. Warm chocolate, coffee and fresh orange juice was served along with bread, cheese, chicken meat pies and homemade Johnny cakes. 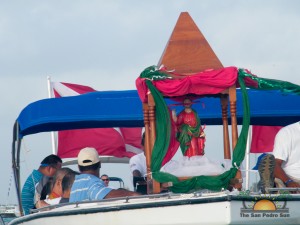 At 6AM, the statue of Saint Peter was then taken out of the church and placed on the bow of a boat for an annual boat procession, a tradition that the island has maintained for over 30 years. The procession left from the municipal dock and slowly moved northwards. The group of church goers in the leading vessel conducted a small service on the moving vessel. The fishing vessels then turned left into the Boca del Rio cut, winding through the lagoon and then eventually going into the Laguna de San Pedro. Once in the lagoon, the procession ended at the El Embarcadero Area. After a short prayer by Father Año-Nuevo, boat captains and fishermen each had their vessel blessed as a symbol of protection while at sea. Once blessed, the vessels slowly departed, making way for other vessels to be blessed.

After the boat procession, Saint Peter was then returned to the San Pedro Roman Catholic Church.