Main streets in most subdivisions around San Pedro Town are being rehabilitated and upgraded. The upgrade of the streets is being financed through the San Pedro Town Council (SPTC) along with support from the Ministry of Works. While the upgrading of streets is one of the basic duties of any elected council, for San Pedro residents, this rehabilitation is a welcome accomplishment, given the fact that for many years the dilapidated streets were left unattended. 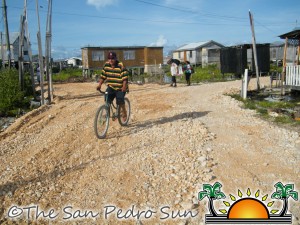 The main trafficable streets in the areas of DFC, San Pedrito, San Juan, San Pablo and San Mateo are being elevated to allow water, during the rainy weather, to run off the main road. The streets are being elevated using hard core materials that are being barged to the island from mainland Belize. Main streets in the various subdivisions that are in more deplorable condition and most trafficable are being worked on first. Once the badly dilapidated streets are identified, a layer of hardcore material is evenly spread to a height of over six inches after which a roller is used to compact the street. After being compacted, additional hardcore is placed on areas that remain uneven to bring the street to one level. Once a street is done being upgraded, the working team moves onto other streets until most if not all are fixed to a better standard. The heavy machinery and personnel used to help upgrade the streets are being provided by the Ministry of Works who has been working closely with the San Pedro Town Council. 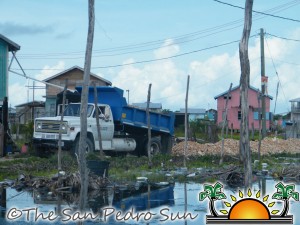 Even the often neglected San Mateo Area is getting its streets upgraded, not with the standard fill of garbage, but with actual, proper hard core material. The San Pedro Sun caught up with the Mayor of San Pedro Town Daniel Guerrero as he inspected works in San Mateo Area while the materials were trucked in. “We have been working in all the different areas and San Mateo is not an exception for us. I do care for the children of San Mateo who go to the Anglican School, and the SPTC is ensuring that they a high and dry street before the school opens. They will no longer have the need to take off their socks and tennis shoes when it rains because the streets are being fixed” said Mayor Guerrero. He added that, “San Mateo will benefit from the street rehabilitation project and will see most of their streets fixed. After this we are looking to start the electrification project to help the people in this area [San Mateo].” The mayor cautioned however, that no new streets are being opened at this time; only existing main streets are being rehabilitated.

So far the SPTC has brought in some 60 barge-loads of hard core material from mainland Belize to improve the streets conditions on Ambergris Caye. In just five months in office the SPTC has invested a little over $1 million dollars in the street rehabilitation project including material, transportation and fuel to operate the machinery.