John McAfee, the antivirus mogul, continues to make international news after he was expelled from Guatemala to the United States. The 67-year-old McAfee has been on the run avoiding investigators of the Belize Police Department who want to question him as part of a murder investigation into the death of his neighbor Gregory Faull, a 52-year-old expatriate and businessman. Authorities claim that Faull’s death has left several unanswered questions, which McAfee could provide answers to. However, McAfee claims he is running from authorities in Belize because they want him dead.

Both local and international media have been trying to find answers as it relates to the murder investigation and if the Belizean Government will be requesting an extradition for McAfee from the US. In so doing, NBC Dateline had attempted to speak with Belize Prime Minister Dean Barrow and with the help of The San Pedro Sun was able to do so on Friday December 14th. PM Barrow told NBC Dateline that while there is an extradition agreement between Belize and the US, the only way McAfee could be extradited to the country is if charges are laid against him – which is not the case since he is just wanted for questioning. “My recollection of the way the treaty works is that we would have to have charges waiting for McAfee before we can seek his extradition. In other words you can’t seek to extradite somebody merely because that person is of interest; merely because the person is needed for questioning. I believe extradition can only kick in where there are charges that have been levied against the person you seek to extradite,” said Barrow, who is also a well respected attorney in Belize. 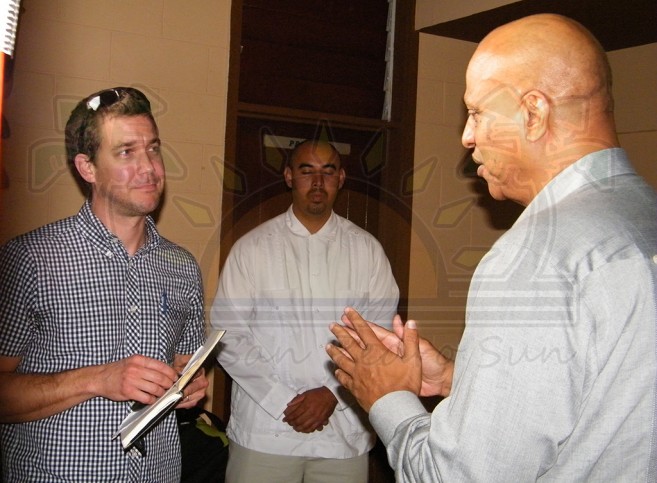 And while getting McAfee would remain a challenge for authorities in Belize, the family of Faull continues to search for answers and hopes to find closure with the success of the murder investigation. According to multiple international media reports, Faull’s family has indicated that they believe that the Belize Police does not have the will to solve the case and that they have been kept in the dark as it relates to the investigation. While PM Barrow could not say how much the Police have been communicating with the family, he did say that if the case is such, then it is regrettable and he is willing to follow up with the relevant people. “It they have not been communicating with the family of Faull then it is regrettable. I have certainly thought that Mr. McAfee, with all his antics has succeeded in elbowing aside what really is the tremendous tragedy that overtook the family. The fact that there has been a murder and the fact that, that is what we should be concentrating on – attempting to solve this murder,” explained PM Barrow.

McAfee, in hiding and eventually running from authorities in Belize, accused the Government of wanting to kill him, and went to great lengths to get his message across, speaking against the country, and categorized by many in Belize as an “embarrassment.” PM Barrow continued that McAfee’s behavior proves that he is indeed “bonkers”, as he referred to him in a previous interview. Barrow said that “I believe that people saw through Mr McAfee very quickly; even those who may not have known of his behavioral difficulty beforehand. I would be very much certain that what he did and the way he behaved did not do any real harm to our country… you can be bonkers and clever and I am prepared to take it as far as that. He is bonkers in my view without a doubt, but he is clearly very clever and shrewd.” When asked about the allegation made by McAfee that the Government has a personal vendetta against him for not making financial contributions to the political party of Prime Minister Barrow, his response was that he has never met McAfee, and the allegation made “is the further evidence, the clinching evidence that Mr. McAfee is bonkers, I have never meet Mr. McAfee.” PM Barrow said that McAfee sent an email correspondence indicating that he, [McAfee] would like to “repair” the relationship, something Barrow said never existed in the very first place.

McAfee had offered to speak to Belizean authorities but outside of Belize (on neutral grounds) but PM says that he doesn’t know if “it is a part of what it is that our police would like to do… again he (McAfee) would have to volunteer to subject himself for the questioning. I don’t see how law enforcement officials in Belize can go to another country and compel a citizen of that other country to speak to them so I am positive that the way the laws of countries such as Belize and the United States work, you can’t do that.”

As to where the investigation into the Faull’s murder stands, PM Barrow says he “hopes” the murder does not go “unsolved.” Meanwhile police believe that McAfee may be able to give “key information” that can help them solve the murder. The Police in Belize have indicated that if McAfee is not questioned the investigation will remain at a “stall.”
Media reports from the US indicate that McAfee has since taken residence in Miami, USA and is in the process of liquidating his properties in Belize. While he managed to elude authorities in Belize, now that he is back in the US, he faces a $5Million lawsuit over the 2007 death of an Arizona businessman, Robert Gilson. The Gilson family blames McAfee for the horrific crash involving the father of three who was taking lessons in ‘aero-trekking’ – a sport that McAfee invented himself and involves flying a trike with an engine at speeds of 75mph, similar to those he used for his Toucan Fly business in San Pedro Town. McAfee had been living in Belize since 2008, avoiding that very same lawsuit, which was brought up against him hours after his return to the United States of America from Guatemala.