Home » Community and Society » “San Mateo is a very difficult area to provide suitable water to… there are significant risks that remain,” claims EWB

“San Mateo is a very difficult area to provide suitable water to… there are significant risks that remain,” claims EWB


Earlier in January, a group of volunteers from the Engineers Without Borders (EWB) were at the San Mateo Subdivision in San Pedro Town conducting a series of tests. The two main tests conducted were soil tests and a community health assessment of the area. The information gathered from the soil test will look at the feasibility of installing passive sewage treatment systems. On the other hand, the information gathered in the community health assessment provides a picture of the community’s health, as well as an indication of current and potential problems. 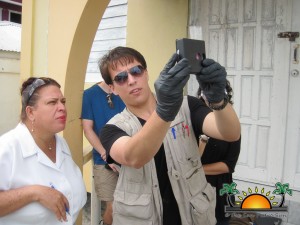 The gathering of information says John Fripp of Engineers Without Borders, “provides a guide to possible solutions.” Fripp explained that health assessments take into consideration a series of factors that are divided into three categories: 1-water quality measurements 2-measures of basic human health and 3- assessment of community infrastructure. “We are unable to sample every household so we tried to look at a distribution of houses. The people of San Mateo were very gracious in answering questions and welcoming us into their homes,” he explained. According to Fripp, as part of the health assessment the team measured body mass index, blood pressure and interviewed household members about their past medical history, noting whether or not anyone had visited the clinic in the past year due to water related incidents. “No one reported going to the hospital due to water contamination. The team did however note rashes on some residents, mostly on children. Chances are the rashes are related to direct contact with contaminated water. A few households reported having diarrhea that they believe to be water related,” Fripp pointed out.
While Fripp would not disclose initial findings of the assessment of water that residents are currently using, he described what the conditions are. “At this point, I can say that San Mateo is a very difficult area to provide suitable water to. However, things are much improved since last year. I think that this is a credit to the efforts of the Belize Health Department officials, local government, volunteers, the roads constructed by the empowerment group and the government, the distribution of the household Sawyer filters through Ann Kuffner of the Rotary, and the people of San Mateo. But there are significant risks that remain.The untreated or semi-treated sewage can transmit disease.Contact with standing water should be avoided. Frequent hand washing is recommended especially before preparing food.Special care should be taken of infants, pregnant mothers, the elderly or those with illness,” he noted. As it related to assessment of existing infrastructure, Fripp explained that “the major vector or source of health problems is sewage. This is fairly obvious. We are looking to see how and if this can enter human water supply which is very dangerous.”
During the January 2012 Texas A&M’s Engineers Without Borders (TAMU/EWB) visit, the team conducted water quality grab samples at five taps and two cisterns, where it was identified that the water had dangerous fecal contamination. Due to the nature of this dangerous condition, the team identified this issue to the authorities. Possible sources for this issue were identified, including standing sewage and inadequate water supply pipes. Bilingual recommendations for household chlorination were provided by TAMU/EWB and distributed by volunteers with Kim Shakelford of Old Miss. According to Fripp, in the most recent January 2013 visit, the team conducted a more thorough approach with regards to water quality testing, health and infrastructure assessments, surveys, and water quality surveys. This included over 200 water quality samples. Surface water as well as the water supply at residential units was examined. Over 30 sites were examined in detail. “The water quality testing includes tests that measured free and total chlorine, pH, nitrates, total dissolved solids, different types of coliform and whether or not bacteria were present in the water. 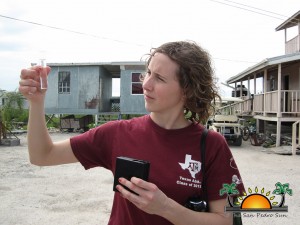 Since fecal contamination was of significant concern, a minimum of two different types of tests were conducted at all sites,” detailed Fripp, who indicated that a report is being completed and will be released after a panel of experts review the results.
Another purpose of the visit by the group was to conduct a comprehensive soil test in the area. The purpose of analysis done by the team was to assess the feasibility of installing passive sewage treatment. “We needed to know what the ground could absorb in terms of grey water effluent, and what the ground could support in terms of the weight of anything that is to be constructed. While the analysis was for our design interest, it may be useful for other construction efforts in the community. We are preparing a report that will detail these findings,” Fripp said. One area of soil tests done was permeability. Such test will help see how fast the water can soak into the ground, water table height and soil texture. Fripp explained a compressive strength of the soil was also conducted. “It will help show how much weight can be put on the soil withoutthe construction sinking into the ground. The tests and analysis that we conducted is standard civil engineering type work,” said Fripp. The test included mainly the drilling of holes to different depths and analyzing the material. “While it might looked like we were playing in the mud, the TAMU/EWB students were conducting systematic tests and evaluations. Careful records are kept of the material.We also used various field instruments to assess soil strength,” added Fripp who indicated that two lots were examined in detail. Fripp explained that the “passive system” referred to would be “something like a septic tank and drain field or a modification thereof.” Such system would not require power or inputs but just periodic maintenance. “Anything that is constructed will interact with the soil that is there. Of particular interest to the Engineers Without Borders team was the permeability of the soil and its compressive strength. These properties are needed in the analysis and design of possible sewage treatment facilities. Our field analysis found very weak soils. We had hoped to use some modern approaches to place material but do not believe it is economical. Construction will need to be supported with piles. This is something that the local residents had already known but we needed to confirm that there was not another option.”
Fripp said that Engineers Without Borders will be preparing a detailed report of both tests conducted by the team.Those findings will be provided through Holy Cross Volunteer Coordinator Lydia Brown, who will then pass on the results to the relevant local government officials and the media by mid-2013.

Cohune Walk renamed in honour of Her Majesty Queen Elizabeth II, and Prince Harry parties with the locals15 Photos